Summer at The Warped Tour 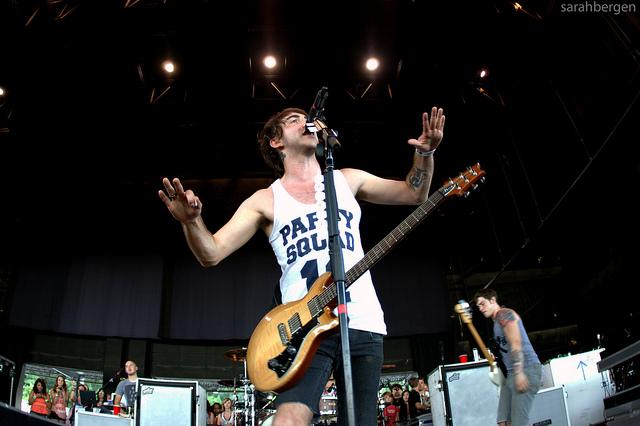 Anyone who considers themselves a fan of the punk-rock scene knows they’ll be spending at least a day of their summer at the Vans Warped Tour. If you’ve never heard of Warped Tour, it can be summed up as an entire summer of one-day music festivals, incredible venues, hundreds on live bands, thousands of sweaty fans, the hottest day of the summer and not enough water to go around.

If you’re not familiar with the tour you might be asking; what type of music does Warped Tour have? Well, whatever you’re a fan of whether it be pop, rock, punk-rock, screamo, alternative, hip-hop, heavy-metal, hardcore, anything. You name it, and you can guarantee the Warped Tour has it.

We caught up with some Annandale High School students who spent a day at the Columbia MD date of the Warped Tour. Whether it was their first year at the tour, or their 4th, they’ll tell you everything you need to know, their favorite and least favorite parts, what you should and shouldn’t bring with you and what to buy while you’re there.

Seniors Jessica Campanilla and Danielle Turner have been to Warped Tour three times. “Listening to awesome live music, finding out about cool bands and taking home new music.” Campanilla said. “My favorite part about it is the idea of all of my favorite bands coming together to one concert. I also like the idea of the non-profits there, because it shows that our generation and the crowd care.” Turner added. In addition to the music and the mayhem at Warped Tour, there’s a section that’s dedicated to non-profit organizations like To Write Love On Her Arms, Truth, Peta, Music Saves Lives, Invisible Children, Greenpeace and so much more. These organization set up booths and spread the word to the fans.”I don’t like the rowdiness that comes with Warped Tour. To a degree it’s fun, but it can reach a certain point where it gets plain ridiculous.” Turner says. The girls recommend you, “Bring lots of unopened water bottles so you can stay hydrated without having to pay $4 for the venues bottled water. Don’t wear flip-flops unless you want to go home shoeless. Wear lots of sunscreen, don’t wear a t-shirt unless you’re aiming to get a farmers tan. Bring lots of money to buy band merch and albums. Wear tennis shoes because you’ll most likely be stepped on. And eat a large breakfast because food is superduper expensive.”

Junior Addy Bramson has been to Warped Tour twice and says, “There were so many good bands playing all at the same time, so I couldn’t see them all,” For each date of the Warped Tour there are half a dozen different stages spread out across the venue with bands constantly playing on each stage. “I went to see A Day to Remember, Attack Attack, The Devil Wears Prada, Of Mice and Men, and Gym Class Heroes.” Bramson said. Her favorite part was “The giant circle pit at The Devil Wears Prada.” For new Warped Tour followers she recommends, “If you’re trying to get in the pit then all you need are sneakers, and pockets that stuff can’t easily fall out of. Don’t go without a phone, or a friend with a phone. it gets crowded there, so its easy to get separated. Don’t bring a big bag, the less you have to carry around the better. Bring water, money and wear sneakers. Don’t get all dressed up because it gets hot and it’ll just end up being uncomfortable. It was so much fun, I can’t even explain how much I loved it.”

Seniors Kelly Dwyer and Andy Tran aren’t new to the Warped Tour festival. Dwyer said, “It wasn’t as hot as previous years,” and Tran said, “This years Warped Tour has been by far, the best. This year had the most perfect line up of bands.” As Warped Tour frequenters, Tran suggest you “Be sure you know what time/stage your favorite bands are playing at.” and Dwyer recommends you “Wear shorts and a tank-top, because it’s so hot being around so many people in a pit.”

When asked if they’ll attend next summer the students all said, “You really dont know, until the bands are announced.”