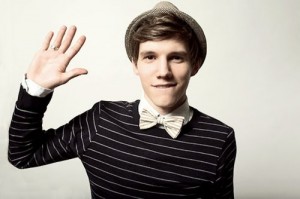 Q: What have you been doing in the past year?

A: I have been playing music. We just released an EP, A Reason To Swim, and I’m really pleased with how it came out. I think just the evolution of my music, and the production ,is more mature and I like the direction in which I feel I’m heading. We just came back from Boston, and I’ve just been touring and traveling, I’ve been to Korea, and I’ve been to China, playing music.

Q: You did a special EP for your fans, paid for by pledges; can you explain that a little bit and how that worked?

A: I didn’t want to do this campaign to start with, before I heard about Pledge Music. I didn’t want to do this Kick Start idea or something similar because I just figure, I always base it from “Would I do this as a fan of music,” or “Would I want to partake in whatever we were doing,” and I was like you know what, I don’t know if I would. But then we met with Pledgemusic.com and they sold me the idea completely- straight away and I was totally in; it was fantastic. We raised a ton of money, and we made the EP, we also made a very low budget video to go with “Holes Inside” and it was completely funded by the fans. I was nervous that no one was going to get into the idea but my goodness; by the second day we were like 50 percent funded it was unbelievable. But if your readers haven’t got it yet, Joebrooksstore.com or iTunes; Joe Brooks A Reason To Swim, there’s like sharks on the cover and a boy on a swing hanging from the moon.

Q: What was the range of pledges donated by your fans?

A: $10 got you the digital download and all of the like pledge things, there was like a free track and a bunch of videos, also entry into a competition to win stuff from the “Superman” video like the cape and stuff. $12 got you the physical copy and the digital download. And then $6,000 got a prom date to someone’s Prom, or Sweet Sixteen or a dinner date or something. There was one very generous girl who I will be going to see very soon, and play in her living room. So thank you to her!

Q: Does that mean you’re going to a lot of proms?

A: Not a lot, I mean that’s quite a lot of money. But, like I said there was one girl who was very generous; there were a couple of very generous people. It’s not necessarily about them though, it’s about everybody, for all the fans, so many people pledged $60, pledged $10, whatever. They bought into it – they liked the idea. So yeah, the campaign was very successful  and  I’m very thankful to all the pledges that partook in it.

Q: Any local musicians from your area who you think deserve more attention?

A: Yes. A band called The Nascent Season is a band that I am currently managing. And I will be releasing to the world probably beginning of next year, we’re working on some sort of EP right now and they’re a group of 17 year old lads who are very talented, and they’re from my hometown. I went home to England one time, and every time I go back I get roped into doing some kind of school event, or judging of their talent contest, or battle of the bands. So I went back to my old school and did a battle of the bands contest and I found this kid and he put a band together and what can I say? The girls are gonna love him. The play like acoustic, its very similar to my style, because the way I see it is like I could see where they were when I was their age. I think they’re better than I was when I was 17, so I could see where they’ll go. And it’s kind of like The Kooks meet Coldplay.

Q: What was the first show you ever went to?

A: I went to see Oasis play in my hometown. It was like 30,000 people and they were great. I couldn’t see anything I’m 5’8” and for a split second I got on my friend’s shoulders whose 6’1” so I could see everything, it was amazing. But [the venues’] don’t like that, and people weren’t even behind me really. I was towards the sound booth in the back, but I just got wine thrown on my brand new bright white hoodie and then some guy just grabbed by boxers and pulled me down. So, needless to say, it was muddy and I was covered in wine but they ended with “Rock ‘N’ Roll Star” and it was awesome.

Q: Do you have any advice for a high school musician wanting to pursue music in the future?

A: Yep. Stick to your guns, don’t let anyone get you down. If you believe in yourself then just go for it. I mean that’s what its all about, you know? It’s so tough, and you can’t lose a minute being worried about what some loser has to say about your music. You have to have people around you who you trust, and take their advice. But at the end of the day, stick to your guns, stick to your instinct. And work really, hard.

A: I’ll be back. Thank you so much. Go like my Facebook, or buy my EP on iTunes or come see a show, or do none of those. Or do all of them!