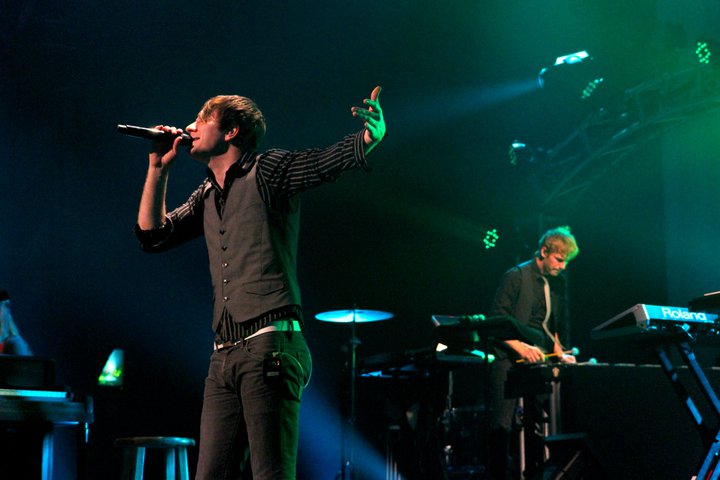 As we pulled up to the curb on the corner of 8th and V street NW, we could already tell by the length of the line that we were in for a rowdy concert. Sophomores Alan Vargas and Jenna Velasquez both grumbled at the thought of having to wait in a line that stretched around the entire block of V street.

Passing a variety of Owl City fans. Ranging from ages six to 60, it was apparent that the fans of Owl City could not be grouped into a definite demographic. There were, of course, many groups of preteen fan girls who were the most excited and could not wait to get into the club to catch a glimpse of Adam Young, the lead singer.

We made our way onto the dance floor to secure the closest position to the stage as possible. We managed to find ourselves a spot about three yards away from the stage, with a mass of people in between. From here we had a good view of the stage and surrounding lights and speakers.

Music played on the speakers as people gradually filtered into the club. The dance floor and overhead balconies slowly filled until both were overflowing.

Finally, after 45 minutes of waiting, lights started flickering and the crowd started to hum with excitement. The opening band, Action Item, would soon come out and begin to warm up the crowd for Owl City. All five members came onto the stage and began to play their pop rock songs for the club. They played their new single “Last Day of Summer,” and ended with a cover of The Wanted’s “Glad you Came.”

After the concert opened with Action Item, Owl City was due to come out. Adoring fans waited to hear the songs that they knew by heart. When the lights dimmed, shouts erupted from the crowd. When Owl City took the stage, decked out in gray skinny jeans and a red plaid button-up, several feminine screams could be heard around the club. At last, he was ready to play.

Owl City opened with his upbeat crowd-pleaser “Dreams and Disasters.” Following this, he proceeded to perform all the tracks from his new album The Midsummer Station. Although his new album is widely considered mainstream, the catchy beats made for good concert music that entertained the crowd. The fans around us could be heard chanting the lyrics to their favorite songs.

Before the night was over, Owl City played his most popular song of all time, “Fireflies.” This song got the crowd up on their feet, jumping to the beat of the music.