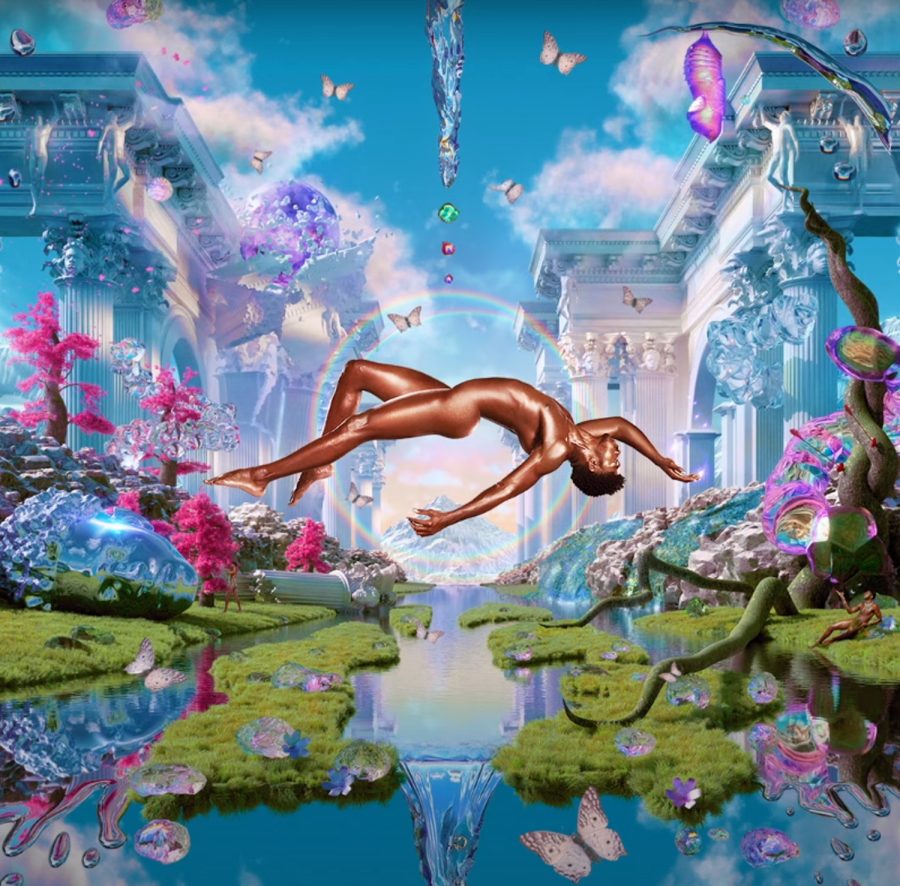 Montero follows up Lil Nas X’s 7 EP, released in 2019. 7 was a messy, predictable project that showed some serious potential, and had some of the biggest songs of the decade. The tracks “Panini,” “Rodeo,” and obviously, the record-breaking “Old Town Road” were all proof of X’s talent for crafting decently well-written hits, with super catchy melodies that instantly cemented themselves into every listener’s head. 7 successfully showed off Nas’s knack at writing sharp, accessible pop-rap with undeniable melodies.

Lil Nas X was a force to be reckoned with in the Summer of 2019, successfully dodging the one-hit-wonder accusations lobbed his way with the release of each new single. Fortnite promos, billboard success, and tik-tok megavirality made 2019 an amazing year for Lil Nas X, who quickly became a family favorite.

This is not a reputation Lil Nas was interested in keeping.

The first single, title track, and opening track ‘Montero’ was particularly surrounded by controversy. Sexually aggressive lyrics, and a music video that saw Lil Nas twerking on Satan himself, as well as a Nike lawsuit, were all huge moments in music news this past summer.

The song itself was pretty good, too. With a lively, albeit generic, Spanish guitar beat, clicky percussion, and one of the catchiest choruses I’ve heard in a very long time, ‘Montero’ very rapidly rose to be my favorite track by Lil Nas.
The song “Industry Baby” was released later in the summer, and saw Lil Nas continuing to prove his talent for well-written and exciting pop rap.

The instrumental is really what carries this track for me, with super wet and satisfying drums, blaring, stadium-sized horns, rolling 808’s, and a triumphant performance from both Jack Harlow and Lil Nas X make “Industry Baby’” one of the most explosive and entertaining pop songs of the decade so far.

“Dollar Sign Slime” is yet another highlight for me. This track works on almost all of the same levels as ‘Industry Baby’, with punchy percussion, bleating horns, engaging performances, and an amazing feature( though “Dollar Sign Slime” does seem to be more trap-flavored in its drum choices). Although the chorus is somewhat obnoxious, possibly due to my overexposure to the word slime, this song ranks among my favorites.

The track “Sun Goes Down” was also released ahead of the album, but this song doesn’t sit as well with me. The lyrical focus is solid, with Nas dealing with his past and struggling to fit in, but the shimmering, millennial-pop tinged instrumental, uninspired vocal performance, and tedious progression cause this track to rank among the boring for me.

Sadly, this is an issue I find all over the album. The track “Lost in the Citadel” is an obnoxiously generic, early 2010’s, one direction style pop song. Peppy rhythms, boring melody, taxing progression, and mind-numbing verses make this easily my least favorite track on the album.

“Scoop” featuring Doja Cat is yet another nauseating moment on the record, with a gently plucked violin instrumental that gets old quick, annoying chorus, and tinny percussion that doesn’t feel like it belongs on a multi-million dollar album. Not even a decent, but brief, Doja Cat appearance can salvage this track for me.

While not terrible, the song “That’s What I Want” is uninspired, to say the least. With its sickening “ooh-aah” background vocals, peppy beats, hand claps, generically lovesick lyrics, and boiler-plate guitar lead, this track feels like an attempt from Nas to capitalize on the trendy, Taylor Swift type sound, made popular recently by artists like Olivia Rodrigo. This song is listenable, but it’s utterly boring, and this sound has been done better countless times.

Lil Nas continues to play musical chameleon on the song “Dead Right Now,” which feels straight out of the playbook of Travis Scotts “Rodeo”, if it was made for the largest radio audience possible, with its psychedelic drum breaks, whining horns, and suspended synth lines. The tune is decent, and the lyrical focus on the rapper’s past is in-depth, making this track a general highlight for me, even if I do find it unremarkable.

The song “One Of Me” is a highlight for its explosive chorus, earworm hook, entertaining verses, and gorgeous piano contributions from Elton John, but I don’t find myself returning to this track very often. This issue also carries over onto “Void”, with its lengthy runtime, glistening guitar tones, and introspective lyrics. This track is impressive in its ideas, but is not a song I will return to.

The twinkling acoustic guitar, busy rhythm section, and captivating vocal performance on “Tales Of Dominica” make it a decently written, pretty infectious piece of alt-pop. The track “Life After Salem” fits in a similar style, with a distinctly more distorted and gothed-out atmosphere. The electric bass hits, Trent Reznor-style drums, and another great vocal performance make this another highlight on this record.

The closing track “Am I Dreaming’” was a surprising stunner on Montero. This track is the most effective ballad on the record by miles, with gorgeous, organic guitar playing, sweet vocal melodies, and jaw-droppingly stunning performances from both Lil Nas and guest Miley Cyrus. The vocal talent on display in this song alone is impressive, with Cyrus and Nas trading powerful, heartfelt melodies with each other, filled with emotion and urgency. I was in no way expecting it to be, but this track is easily a favorite of mine.

All things considered, Montero isn’t a bad record by any stretch. Lil Nas X continually proves why he has been one of the most consistently successful artists since his breakthrough. Yes, the tracklist has quite a few lulls and a bunch of ideas that could have been improved on, but I wasn’t expecting to be blown away by this record.

Montero is a dive into the most trendy and contemporary sounds of the past decade, but not one that often gets lost in trying to garner mass appeal. No track here feels desperate or insincere in the way a Maroon 5 or Ed Sheeran song would. Everything is extremely accessible, but not to a fault. While this can get grating at times, the core songs are well-written enough to overlook this fact.

Controversy, lawsuits, and shock value aside, this record would not be as popular as it is if not for the sheer talent Lil Nas has for crafting his own catchy, entertaining, and mass-appealing brand of pop rap.