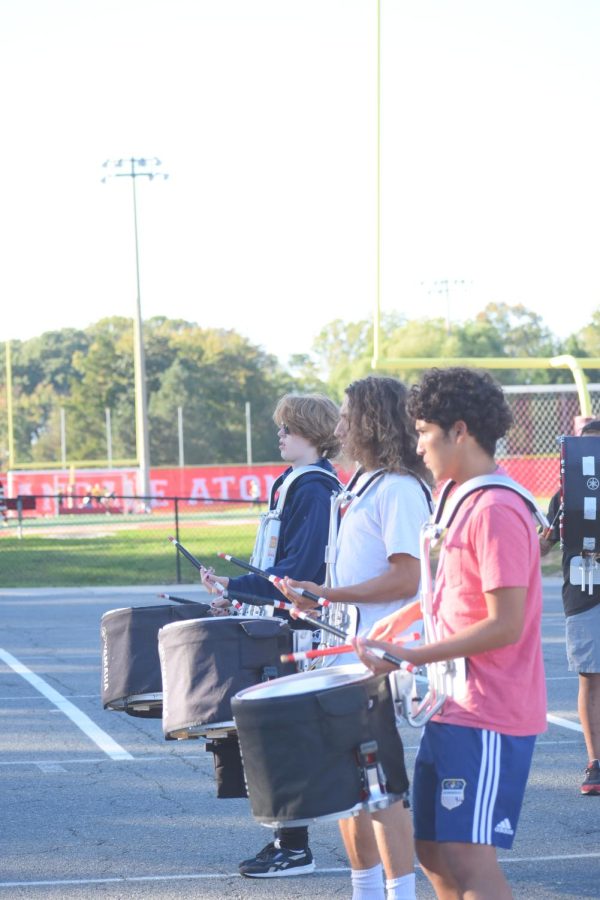 Atom Marching Band has major success in their performances and competitions.

The marching band has had quite an impressive season. Due to the pandemic last year the band wasn’t able to perform outside of school with many events and concerts being canceled for the remainder of the school year. But now since AHS has made sure that in-person lessons go accordingly the band has performed three different times excluding the halftime performance for home football games.

Tyron Barnes the director of the AHS marching band was asked how he felt personally about students setting up their personal goals, working with others to achieve an overall goal for the band, and the obstacles faced since coming back to school after nearly an entire year without physical contact,

“I believe that students are relying on collaboration to achieve their specific goals. Given that it has been a year without marching band activities, students are more eager to perform well and create great memories. With all the obstacles placed before them, they still manage to come out on top.

At times, things were stressful; however, the students continued to persevere. This is the best group of students that I have had the pleasure of working with. Their drive and determination to succeed are beyond what I ever imagined for them,” Barnes said.

“The Annapolis Invitational. The Marching Atoms had a rough week, had to adjust quickly to multiple changes, but still went on the field and gave a stellar performance. It made me emotional, and that does not happen often. It could not have been better than what it was. On the grandest stage so far, they represented Annandale well,” Barnes said.

“Our past performances have been pretty good in my opinion, A lot of people seemed to have enjoyed our previous performances including our most recent in Annapolis,” freshman Leo Marzigliano said.

“Our best performance has easily been the one we did at The United States Naval Academy, Annapolis, Maryland. We got first place that day, and it was a huge success our director was very proud of our effort and hard work we put in to achieve that, I was overall very happy with the performance,” freshman Brian Bernard said.

After almost having zero physical contact in school due to the pandemic last year, The marching band has made very tremendous progress in such a short period with each performance improving the band’s overall sound and gradually increasing individual skill. We hope the marching atoms continue working hard as we look forward to their future performances.

“My favorite song so far this year has been ‘Industry baby’ by Lil Nas x and Jack Harlow,” senior Andrew Zurita said.