All Is Lost review 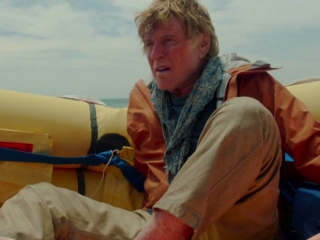 Few words, great impact. All is Lost contains only a handful of dialogue, but the story is moving and powerful. It tells the tale of a man whose boat collides with a shipping container and rapidly begins to fill with water. He repairs the hole, but strong storms cause his boat to sink and soon he is left in the middle of the Indian Ocean in a life raft. He has little food and water and no way to contact anyone for help.
Robert Redford stars as the main character. In fact, he is the only character. The man he plays is strong, mostly silent, and unnamed. Still, he manages to draw in the audience and get them to root for his survival. This role is really a testament to this movie legend’s acting skills.
Though the lack of dialogue and characters can make the movie seem slow at times, it makes up for it in an emotional story. The viewers will feel the pain of the man with him, as everything he tries to do to save himself ultimately fails. The vivid sounds of the raging seas and storms add to the depth of the story and trigger the viewer’s imagination.
Instead of being told through words, this story is told through actions and images. The camera work was especially helpful in this. Audiences are brought along with the man through storms, churning seas, and days adrift under the hot sun. The viewer watches as the man really loses everything.
All is Lost is a movie about survival and strength. It tugs at your heart and the twist in the ending will leave viewers speechless and wanting more.
This limited-release movie deserves an A for Robert Redford’s phenomenal acting, the moving story, and the breathtaking camera work.