Dune’s visuals will dust you away 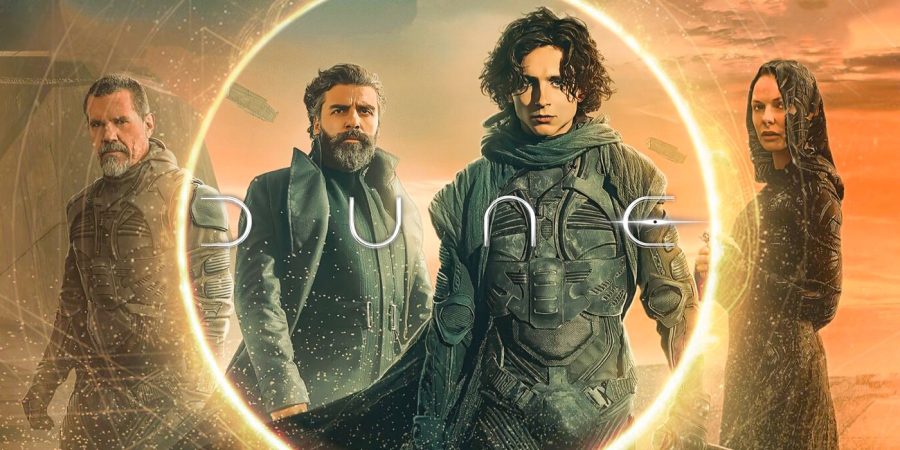 Released in 2021 and directed by Denis Villeneuve, Dune is based on the 1965 novel Dune, written by Frank Herbert. The movie combines different genres like science fiction, fantasy, action, drama and adventure.

The movie tells the story of Paul Atreides, played by Timothee Chalamet, and his family as they do business on the most dangerous planet in their universe, Arrakis.

Personally, I loved the complexity of the world created in this movie. The story line, and even the attention to detail used to portray the different elements that were incorporated into the movie.

The addition of iconic stars like Zendaya, Jason Mamoa, Timothee Chalamet, Oscar Isaac and Rebecca Ferguson created a combination that will stay rent free in your mind. Overall, the movie was a perfect example of entertainment.

I must mention that even though I enjoyed the movie, many fans of the original book thought that this movie did not bring enough justice to the books. As someone who hasn’t read the books, I can’t agree or disagree with that statement.

However, it is important to mention that many people who had read the books before thought that the movie left out important parts of the book that would have been beneficial from the movie. On the other hand, the book’s are so detailed that it would have been impossible to condense all of this information into one movie.

Even though I can’t attest to either statements, I can express my discontent with the producer’s decision to overly advertise Zendaya’s performance in the movie posters and trailer when she did not have an active role in the movie.

When seeing all the posters of her character, watchers thought that she would play a significant role in the movie when in reality, she was there for maybe 10 minutes to 15 minutes max.

I had huge expectations of seeing her play this new character, so I was disappointed when I realized she wasn’t a big part of the movie.

It is arguable that Zendaya’s limited role in the first movie was done purposefully, so she could play a larger role in the sequel to the movie that has already been announced. It’s expected to release sometime in 2023.

Apart from this minor confusion, the actors did a fantastic job at delivering this movie. I loved Rebecca Ferguson’s acting as she played Lady Jessica, Paul’s mom in this movie.

The amount of effort and dedication she put into this character allowed me to feel everything she was feeling. The same happened with all the other characters; I was able to care and connect with all of them quite more than I had expected.

Another highlight of the movie was the incredible soundtrack, written by Hans Zimmer. I also appreciated how Villeneuve used minimal CGI and greenscreens to produce the movie. It made it seem much more realistic.

Overall, the movie was delightful to watch. The visuals were stunning, and the acting was phenomenal. I was disappointed about the limited amount of screen time that was given to Zendaya. Regardless, I’ll recommend Dune to any movie lover looking for an exciting movie to watch.