Band kicked off the field 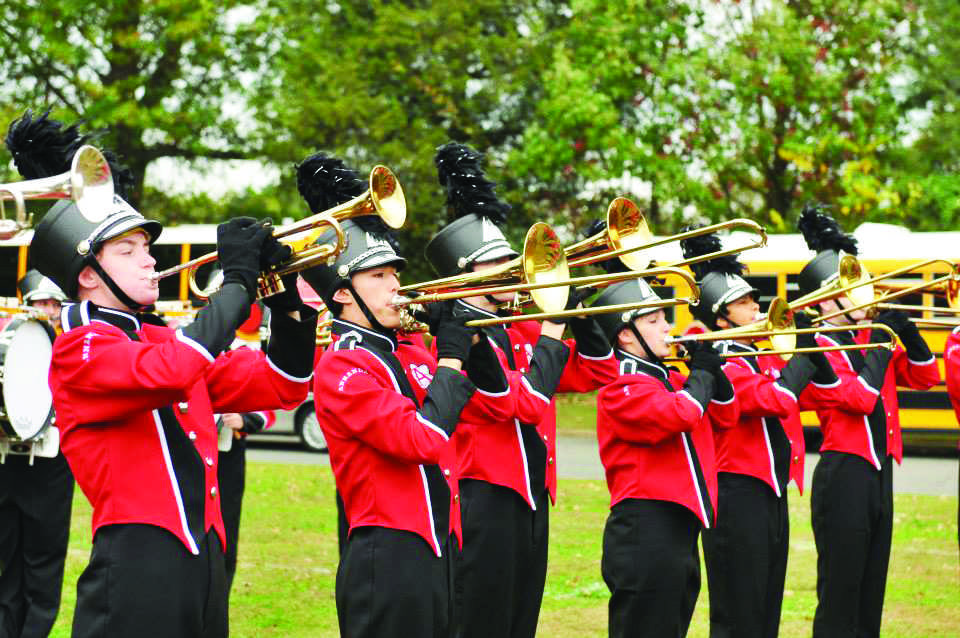 The band performs at a competition at Millbrook High School where they won 'Best Music.'

“GET THE DAMN BAND OFF THE FIELD,” a parent of one of the football players said at the AHS Marching Atoms “mid show” of their Senior Night performance on Nov. 8.

The Annandale Atoms faced South County in their last game of the season. The night began as a typical Friday night football game in the fall would; cold and under the lights in Bolding Stadium but then turned sour for the marching atoms. In the beginning of the game, the band stood out in the cold weather, making a tunnel for all the seniors in the football team, dance team and cheerleading squad to walk through for their senior night.  At halftime, all of the seniors were announced, the band started performing their show, “Music of the Night” with 7:36 left in the halftime period. As they played their first song, the football coaches brought their football teams back on the field to start to warm up for second half. At first, the teams stayed in the end zone, however, that changed when the band began performing their second piece, when both football teams entered the field by going past the goal line in the direction of the performing band students.

Unfortunately, this was not new. Throughout the entire 2013 season, the football team has been known to come too close to our performance, or even interrupt some of the students marching, while they performed.

Then the unspeakable happened. Coach Mike Scott and a few other coaches as well as some players began yelling at the band and Band Director Adam Hilkert to “get the band off the field.” According to the game clock, we had about 4:30 left and halftime wasn’t over.

The screams from the fans and coaches became more intense, and Coach Scott resorted to his own measures by shaking the podium of junior Assistant Drum Major Douglas Nguyen, and then yelling at the other Assistant Drum Major, senior Noah Wolfenstein, to stop conducting and get off the field. Yells came from the stands and the coaches to the press box and the field.

This, in its own right, was very rude. There were parents and grandparents of band members, alumni band members and friends of Annandale, who were enjoying the performance.

Suddenly stopping the performance in the middle of a piece, like they wanted us to, would have been distasteful and wrong from a musicians’ perspective. Putting it another way, would any football team ever be forced to stop playing in the middle of a quarter and told to get off the field?

For the marching band, there couldn’t have been any more disrespect shown to us, the band staff, the band alumni who were present, and the students.

Prior to the game, the band had a special “Band Senior Recognition Ceremony,” where all seniors gave speeches reminiscing about what band has meant to them at Annandale. Principal Vincent Randazzo was in attendance and praised the seniors, saying, “The marching band embodies what this school is all about.” If that’s true, why couldn’t they have been shown respect for us?

According to Principal Randazzo and Director of Student Activities Karl Kerns, the Atoms football team would have received a 15-yard “Unsportsmanlike” penalty if we hadn’t been removed from the field when we were.

According to the National Federation of Schools Football Rule Book, on page 19, rule number three says “As the teams leave the field [at the end of the first half], the timer places 20 minutes on the clock and upon reaching 0:00, places three additional minutes on the clock” to allow the football team to warm up for the second half. If this is so, it was inexcusable for Coach Scott to bring the football team back on the field with 4 minutes still left on the halftime clock.

In any case, the football team would have still received their allotted three minutes. This rule was created to make sure that the teams are on the field by the end of halftime to be ready to warm up, rather than still in the locker room, thus not gaining an unfair advantage against the opposing team.

Before the game, Principal Randazzo discussed with the referees that due to it being Annandale’s Senior Night, halftime might run over and that we needed extra time, and fortunately South County agreed to the time allotment during halftime.

According to sources, many people warned the Athletic Office and Kerns about this dilemma before the Friday night football game and they were advised to have the band perform their show post game instead of during halftime. However, we were told to march during halftime, because there should be enough time.

The penalty is just 15 yards. Yes, it is still a penalty, but would that have really made a big difference? The marching band shows respect for the football team and supports them no matter what. Is it asking too much to take one for the team and allow one “Unsportsmanlike” penalty to allow us to have two extra minutes to show appreciation and respect to the band?

The VHSL and NFS have very strict rules about treating the game, its players, and the whole game experience with the highest quality of sportsmanship in mind.

Apparently, the treatment of the marching band has not been figured into that equation. The way this was handled by the Annandale coaching staff and administration was poor in taste and brought out the worst kind of “unsportsmanlike” behavior. So administration, why couldn’t you respect us for once?

It is odd to think about how a team with a head coach that has a losing record during his tenure gets more recognition and respect than the marching band who competed in an open class and won a State Championship Title and their first ever National Award.

The players on the football team were not at fault in this altercation because they were just doing what they were told by administration. Many of the football players even felt bad for the members of the marching band as their coach made them get off the field.

While we understand the rules of the halftime time limit, the way this was handled by the coaching staff and by the Administration was flawed.

Do the Marching Atoms truly embody what this school is about or is that something they say?