Senior pranks get out of hand 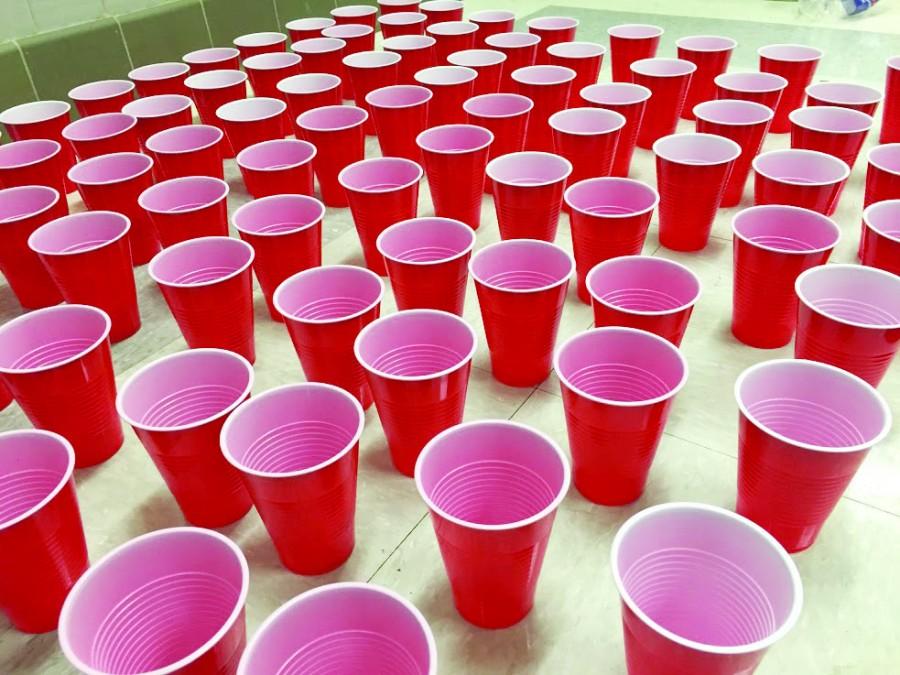 A common senior prank is blocking hallways with water-filled cups.

Judy Nanaw, Special to the A-Blast

Although a senior prank has been under discussion, there have been no big attempts to have a senior prank and nobody has gotten into any serious trouble. This of course is a good thing, but many students love the idea of having a big funny joke set up with all their classmates at the end of their last year in high school.

Arrangements are under way for a senior prank but will they be hampered by the strict rules against it?

Annandale should have a senior pranks policy where pranks are allowed to take place if they get accepted by the administration of the school. This way seniors will have one more thing to look forward to in their last year and still make sure the safety of everyone is secured. School-approved pranks could be harmless as long as the school is prepared to deal with it beforehand. It could be fun for upperclassmen and underclassmen alike.

In the past, there used to be a senior stampede that would take place at the end of the year. Seniors would run through the hallways all around the school throwing papers everywhere.

It was a fun way to finish off their last year as high school students before they’re off to college and bigger places. Running around the school they have been in for four years with the rest of their classmates most likely brought great feelings of joy to each of the seniors.

The stampede is no longer done at Annandale because of the countless injuries and problems it brought. In the last years, the stampedes got out of hand as some students were injured.

Since then no big attempts have taken place to have a senior prank and nobody has gotten into any serious trouble. This of course is a good thing, but many students love the idea of having a big funny joke set up with all their classmates at the end of their last year in high school.

In recent years, there have been attempts of having senior pranks that never really worked out. There would be small random incidents where a small group of seniors would gather and try to commence a prank, but it never worked out for fear of getting in trouble with the school or even the police.

Senior pranks would be so much fun and definitely unforgettable for every senior. Leaving high school brings mixed emotions for everyone- relief and happiness and sadness, but it is very important to leave with a laugh and knowledge that you and all your peers left something for the school to remember your class by.

Senior pranks are popular traditions that take place in high schools all around America. The idea is for the soon-to-graduate students to leave a funny and memorable sign of their class at their high school even though sometimes senior pranks don’t turn out to be so innocent.

There have been countless incidents in high schools where senior pranks have gone awry. The students who take part in these pranks are being punished by being banned from graduation, faced with criminal charges, and even jailed.

For example, in Sequoyah High School in Madisonville, Tennessee, seniors who were involved in a senior prank that went too far were not able to participate in their graduation ceremony. They were told that they will have to pick up their diplomas another time as they were stripped of their oppurtunity to walk across the stage.

Almost half of the senior class showed up to school with supplies of glitter, balloons, toilet paper, and many other objects. Their plan was to decorate the school with these random items, intending to keep it fun and harmless.

According to the Monroe County Schools Director, Tim Blankenship, the incident was a disgraceful act. The prank led to damaged school property.

“The prank resulted in severe vandalism of the hallways, restrooms, and classrooms of the school, it was a reprehensible act,” Tim Blankensip said.

At Chopticon High School in Southern Maryland, 72,000 ladybugs were released in the halls and classrooms of the building by five people as their senior prank. The thousands of insects that were ordered online left the school in havoc and four juveniles were charged with burglary for forcing open a door of the school at 3:40 a.m. in order to place in the bugs.

“It was a mess, when you walked in the building, they covered the walls and hallways, flying around, and they were all in a pile in different areas of the building.” a school staff member said.

In South Iredell High School in Troutman, North Carolina, students were evacuated after a senior prank triggered a bomb search to take place at the school. The prank that took place in South Iredell led to two students’ arrest.

Two seniors organized a prank to place alarm clocks in unused lockers and have them go off at different times. What was meant to be harmless left them with a charge of hoax by using a false bomb in a public building, which is a felony.

What was meant to be a joke had left no one laughing when the entire school had to be removed from the building in order to ensure the safety and security of all the students and staff members.

Annandale High School is not able to have senior pranks take place. It does not have an official senior prank operation where pranks can get approved by the administration in order for the jokes to stay safe.