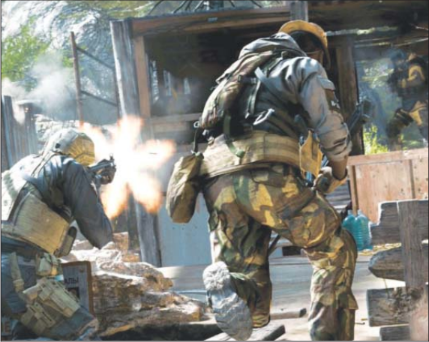 Graphic and violent video games have increased in popularity over the past couple of decades and it has recently recieved a lot of blame as a reason for school shootings.

Gun violence has been a controversial topic for the past few years but we have yet to come across the reason for what is causing it.

Since 2019 began there have been over 21 deadly mass shootings, but the problem is that nobody knows where to point the blame.

Many politicians such as the Californian Congressman Kevin McCarthy and President Donald Trump have come out to say that shootings are in fact linked to “violent video games.”

The issue with that claim is that there is no hard evidence linking shootings and video games together.

However, there is evidence that proves that gun violence is not related to video games at all. According to Newzoo Institute for Health Metrics and Evaluation, the United States isn’t even the biggest consumer for video games that are considered violent, it’s China.

Even though the leading consumer is China, the United States is leading in the number of deaths in mass
shootings.

Therefore proving that there is no correlation between the two. A majority of the people who are making these claims are conservatives and this makes it seem like they are to use any excuse to protect their gun rights.

Video games have been a constant scapegoat every time a new mass shooting occurs. Walmart even began
removing displays of violent video games after the shooting that took place in El Paso, Texas.

It is unnecessary that Walmart took this action because they’re trying to stop shootings by getting rid of game displays but they won’t remove guns from their stores.

Over 70% of high school students play violent video games; yet only 20% of school shooters have played these same video games, according to the director of the Interpersonal Research Laboratory and professor of psychology at Villanova University, Patrick Markey. If the claim of games influencing gun control was factual, the statistics would be much higher than 20%.

Playing violent games doesn’t mean that you want to be violent towards people in reality.

If there is no statistical evidence or any evidence at all for that matter, why do so many conservatives keep pointing the figure at video games? It’s because they don’t want to admit shootings keep happening because of the guns that they are trying to protect.

It’s clear that efforts need to be made regarding gun reform but that won’t happen until people stop pointing the finger at things that are unrelated and holding guns and the people using them with the intention of harming someone accountable.