Senior traditions are slowly being upended 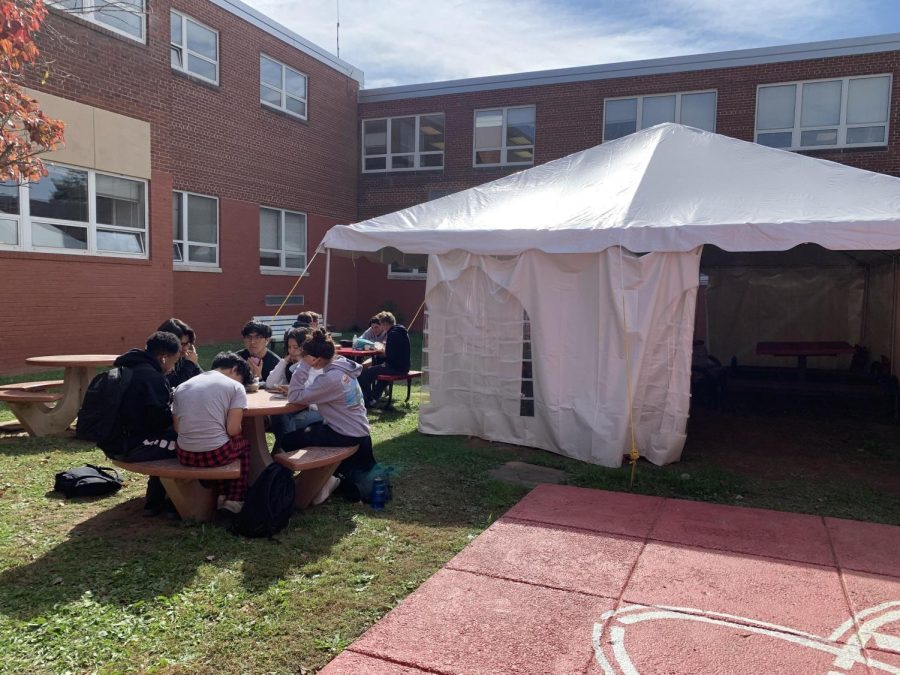 Seniors have not been able to paint the Senior Courtyard which has been a recurring traditions amongst the senior class. for a few years now.

In past years, seniors had the privilege to have their graduation at DAR Constitution Hall. Last year, due to the pandemic, graduation had to be held outside on the football field instead of Annandale’s usual location.

This year, it was decided that graduation will be held at the football field once again.

This decision has caused frustration amongst the senior class because they believe their senior traditions are being stripped away from them.

This decision was likely decided to ensure the safety of the students and their families, but it is understandable for seniors to feel upset about this situation.

“The opportunity for it to be safe was one of the factors when making this decision. The second factor that led into it was that using DAR as a graduation slightly limits the amount of guests that we can bring.” Principal Shawn DeRose said.

At DAR students get four tickets and have the opportunity to purchase more. Annandale’s graduation will allow for students to get six tickets instead. It is simply a two ticket difference.

This new tradition will not only affect current seniors, but also for future classes as well.

Of course safety should be our top priority, but this priority is already being contradicted by constantly being in close proximity to each other.

The school still holds sporting events where students are in closed spaces and close proximity.

Although football games are held outside, it doesn’t change the fact that dozens of students are gathered together while mask less. Knowing this, why is our graduation being affected but sporting events aren’t being held to the same standards?

If the school already allows for events with large gatherings, then what damage will a ceremony at DAR Constitution Hall do?

Having one ceremony indoors that celebrates our completion of high school is miniscule compared to the repetitive sporting events that allow students to gather in big groups without masks.

“I get how Principal DeRose is just trying to keep us safe, but it sucks how we won’t have a traditional graduation considering that I’ve been waiting for this day for four years,” senior Sydney Long said.

Many other seniors share the same idea as Long and think that graduation should be held at DAR Constitution Hall. Some would even go as far as calling it outrageous, but not simply because of it being outdoors.

What seems to be the downfall of this idea is the fact that it will be held right in front of school on the football field.
If the ceremony is somewhere other than school, then seniors might actually agree with this new tradition and not see it as a loss. Rather than it being held at our school’s football field, it could be at a park or any location with beautiful scenery.

While many people are completely opposed to the idea of a football field graduation, others don’t seem to mind a long time senior tradition being replaced with something new.

“I honestly don’t mind the idea of our graduation being held outside of the school. I’m always at school so it only seems fitting for it to be held at school,” senior Tiffany Parada said.

There might be a few people in the senior class who do not mind this new idea, but we cannot ignore the many complaints.

The best way that DeRose and administration should go about this situation is to listen to what seniors have to say and take everyone’s ideas into consideration. Although it might be too late to reverse a decision that has already been made, it won’t hurt for the administration to finally include seniors in decisions that affect them the most.

Every year, past seniors had the opportunity to decorate the senior courtyard with positive messages, their graduation year and other things that mark their creativity.

This would be present all throughout the year while seniors ate lunch at the courtyard. This year, DeRose has completely taken away this right from seniors and it’s absurd.

“I’m focused on trying to improve our facility at Annandale. The painting of the senior courtyard is relatively new and has only been here for a handful of years,” DeRose said. “It wasn’t aesthetically pleasing out there, it got a little loose of what was painted out there besides the graduation years.”

DeRose said that these paintings are not aesthetically pleasing, however, seniors would disagree. The paintings that previous seniors have put up held value in not their appearance, but rather what it represents.

Seniors should be able to draw what they want in an area that’s just for them.

That courtyard is for seniors to enjoy and only seniors. It is not there for administration to determine what is aesthetic in a place that is designed for the senior class.