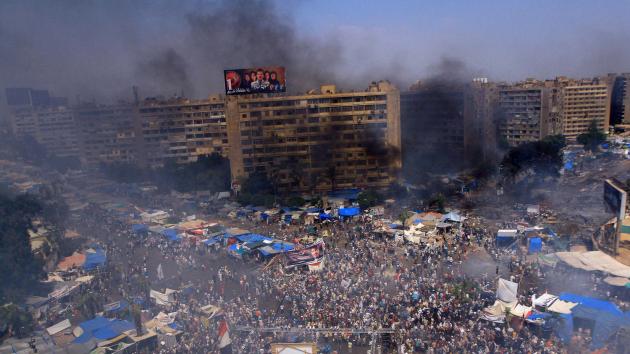 During the Arab Spring of 2011 Hosni Mubarak was deposed after massive protests by Egyptian citizens. Following this seemingly victorious transition toward democracy, free elections were held beginning in November 2011.

Mohamed Morsi, a Muslim Brotherhood candidate, became president of Egypt after the elections.

Egyptian Arabic teacher Ola Layaly said that she was going to give Morsi a chance.

However, under Morsi’s regime, Egypt suffered many economic problems, high unemployment as well as high gas and food prices.

“Everything was a mess,” Layaly said, “It did not come out right. Everybody [was] so upset.”

Additionally, Morsi grabbed power for himself. He attempted to add Islamic Sharia law into the new constitution. He also abolished judicial review on his actions and legislation.

As a result of Morsi’s power grabs and Egypt’s economic problems, a new set of protests began. These protesters were diverse in religious and political belief but were united against Morsi and the Muslim Brotherhood.

In response to these protests the Egyptian military deposed Morsi on July 3.

“[The Muslim Brotherhood] forced me to be against them,” said Layaly, “[I am] very thankful that the army intervened. It is not a coup. I wanted someone to take care of the situation.”

The military’s actions caused the eruption of another set of protests currently taking place in Cairo and the Nile River and Delta. Pro-Morsi and Muslim Brotherhood protesters marched against Morsi’s removal from power.

“I stopped watching TV. I need my country back,” said Layaly.

These protesters assembled themselves in large camps in Cairo. These camps caused chaos and violence within them and in the surrounding areas.

The Military stormed the camps and dispersed them after they refused to remove themselves. In response, Pro-Morsi and Muslim Brotherhood protesters went on rampages destroying government buildings and Christian homes, businesses, and churches.

According to the Washington Post, “More than 60 churches have been attacked, vandalized or in some cases set ablaze across Egypt in a dramatic surge of violence against the nation’s Christian minority, which began after security forces raided two Islamist protest camps on the morning of Aug. 14.”

“It hurts me a lot to know they [the Muslim Brotherhood] call themselves Muslim,” said Layaly.

Given Egypt’s upheaval and tumult the U.S. must consider changing its aid to Egypt. The US gives 1.5 billion dollars to Egypt with 1.3 billion dollars of that going to the military for weapons. The aid has not been cut completely, but legislators have begun to get nervous ever since the Arab Spring and the Muslim Brotherhood gained power. The decision is still difficult, because a military coup is not a legitimate government either.

You can make a difference in this tumultuous situation. What can you do?

1. Stay informed. What happens in Egypt affects the rest of the Middle East. We need to keep an ally in the Middle East, especially with Syria and Iran against us.

3. Pray for protection of Egyptians and a peaceful democracy.