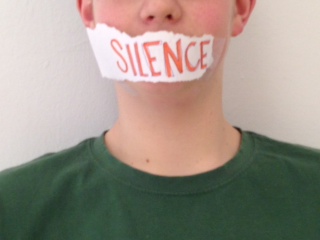 Duck Dynasty star Phil Robertson shared his controversial beliefs with a reporter from GQ Magazine. This sparked a flurry of reporting and commentary, praising Robertson for speaking his mind and condemning him for sharing his opinion on a controversial. A&E, the network that airs Duck Dynasty, suspended Robertson from the show for his comments even though the interview and article were completely separated from the show.

Have you ever been praised or condemned for sharing your views?

“On a controversial topic I feel okay just as long as I am supporting my opinion,” freshman Bryan Benavides said, “They [the students] are mostly shy of expressing their own opinions and they are afraid that many people just have a different point of view. I usually tend to just say what I really think I should say.”

“I feel people would be estranged if I actually talked about my controversial beliefs, because I never really say anything about it, but I feel like I could talk freely about it at any time,” freshman Anna Fuentes said, “I have never been intimidated [from] speaking my mind. Talking about religion and stuff they do not exactly want to talk about sometimes, because they are feel like they will offended somebody else.”

Major faiths, including Judaism, Islam, Christianity, Buddhism and Hinduism, are represented at AHS, and all contain a commandment to “love one’s neighbor as himself.” To be accepting of diversity means loving our neighbor as a person, regardless of whether we agree with their faith, political views, sexual orientation, ethnicity, or academic strength.

“I can speak my mind freely. Yes I have [been intimidated] quite a few times my parent would tell me that I should not speak freely, mostly about religion, with them [my parents] and others. It is not very nice to insult other religions. They [students] are not brave enough to speak about it [their opinion],” an anonymous freshman said.

In more recent previous generations, tolerance meant that each person had the right to believe what he believed. Discussions were encouraged. Republicans and Democrats debated and topics like abortion were widely argued. People respected each other despite disagreements, participated in intense discussion with opinions that had a base of understanding. They listened to others and opposite arguments. They focused on the topic and disagreement was not offensive.

Now however, disagreement is personal.

“On a controversial topic it depends on what you are saying, if they [the students] agree with you they would probably be okay with it and agree with you too, but it could probably get into a heated situation if they do not agree,” sophomore Anthony Walker said, “You should be able to speak freely about whatever you want. They probably take it personally that someone is not agreeing with them. Unless it is personal to them, then they have a reason to take it personally, but if it does not concern them, then they do not have a reason to take it personally.”

To disagree is to dislike the opinion holder. Disagreement means you are “intolerant” and a “hateful” person. To be tolerant we must believe in other opinions and faiths or not share our own opinions and faiths. One side of the topic is socially or politically “correct” and the other “incorrect.” You risk your status to believe the socially or politically “incorrect” opinion. This asks the question, who decides what is “correct” and “incorrect”? Maybe it is the loudest, the one who whines the most, the one with the most logic or the most money or the most friends who decides this.

“If there is something that most of the class likes and I do not like, I am not going to say anything,” freshman Remmy Salinas said, “Most of them would respect, but some of them would try to shot me down and give their own opinions.”

In the Duck Dynasty case, the national discussion that followed argued whether Robertson had the right to say what he believed even if it was considered offensive or intolerant by some. Freedom of speech plays a central role in the discussion. As diversity is a hallmark of AHS, freedom of speech is an American hallmark bringing people to the US.

So how do these current situations measure up?

Another recent public situation involved the daughters of former vice president Dick Cheney. Liz Cheney, running for the US Senate for Wyoming, was accused of supporting gay marriage, because her sister, Mary Cheney, is lesbian. She reiterated that she supports traditional marriage saying, “I love Mary very much, I love her family very much. This is just an issue on which we disagree.” Her sister shot back saying, “Liz — this isn’t just an issue on which we disagree — you’re just wrong — and on the wrong side of history.” Who showed diversity and tolerance?

In a different situation in Camp Shelby, a military post in Mississippi, soldiers were required to change the name of the Christmas football tournament. According to a soldier present, the equal opportunity service officer said that individuals can share the merely cheerful greeting, Merry Christmas, but as the Army, one cannot extend the greeting or use it in an official name, because not everyone celebrates the widely celebrated holiday, Christmas. Is this diversity and tolerance?

These situations beg the question, should anything that is not completely neutral ever be allowed in public? Cannot a person still enjoy the spirit of a cultural American holiday and the generosity of fellow Americans even if they do not believe the Christian root to Christmas? Cannot a person still be exposed to things they do not believe in without being offended? Must they always use the emotional wimpy trump card, “I’m offended”?

In the Temecula Valley Unified School District, a first grader was stopped from speaking in the middle of her presentation, because she was explaining her family’s traditions celebrating Christmas and the birth of Jesus. The assignment was to share about family Christmas traditions. In the same school district, a seventh grader read the Bible for his non- fiction reading assignment. However, his teacher said that the Bible was fiction and did not count for his assignment.

The AHS Leadership collected shoeboxes for Operation Christmas Child. The American Humanist Association threatened to sue a South Carolina charter school participating in the same program, because Operation Christmas Child is a program of the Christian organization, Samaritan’s Purse. One of the schools cancelled the collection to avoid a suit, but told parents that there was nothing unconstitutional about the collection.

This brings up the question again; is it really tolerance if people cannot participate publicly in anything related to a faith? These situations make us ask, what does freedom of speech mean and look like in practice?

It would be ideal if here at AHS we could speak our sincere opinions and not be bullied or ridiculed or shunned. We would value respect and discussion of opinions and not neutrality and the absence of opinions. Then, we could appreciate diversity by discussing it, not hiding behind it.

To truly accept others, we do not need to believe what they believe or make them believe what we believe, but we should discuss our beliefs, opinions and views. We should be comfortable and not feel challenged or offended if someone mentions their faith, political party, sexual orientation, or race.