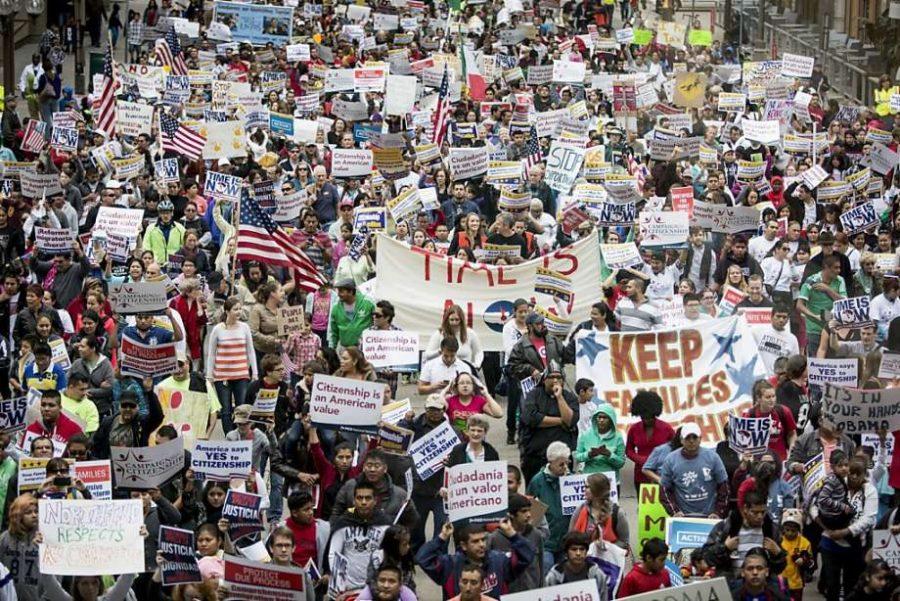 This summer, the Supreme Court is expected to reach a verdict on the controversial topic of illegal immigration. President Obama’s executive action would give benefits to 4 of the 11 million undocumented immigrants in the U.S. In November 2014, President Obama announced Deferred Action for Parents of Americans and Lawful Permanent Residents (DAPA), a plan that would grant undocumented immigrants that are parents of U.S. citizens temporary protection from deportation and apply for work permits. This Supreme Court case is important to the millions of undocumented immigrants in the U.S because this program would help several students’ families at Annandale High School.

According to CNN, one program that grants temporary protection from deportation is called Deferred Action for Childhood Arrivals (DACA). In 2012, DACA was created to grant two years residence in the U.S and work visas to undocumented immigrants before they turned sixteen. At Annandale High School, there are students that are covered by DACA. The benefits DACA provides gives undocumented children opportunities a U.S teen wouldn’t typically have to worry about. Such as worrying about not being qualified to get a driver’s license or job. Also, the biggest fear of an undocumented immigrant, being deported and separated from their family, friends and life built in the U.S.

Many immigrant families have long waited for President Obama and Congress to take action on immigration reforms. President Obama’s announcement of DAPA was the plan they have been waiting for. However, this excitement was ended by Texas governor Greg Abbott and 26 other states. The 26 states, led by Texas, sued the Obama administration for overstepping his presidential power by attempting to create DAPA. According to the USA Today, President Obama’s plan would protect more than 4 million undocumented immigrants with children that are U.S. citizens. Immigrants qualified for the programs are eligible for health care, work permits, disability and retirement benefits.

Having the justices in the Supreme Court favor in DAPA would be a dream come true for many immigrant families. Citizens of the U.S. and legal immigrants don’t face the problems undocumented immigrants face day to day. An immigrant parent wouldn’t be able to drive their child to school because they can’t apply for a driver’s license. Without a work permit, the number of jobs an immigrant can be hired for is limited. The jobs they can qualify for require little to no education and pay low wages, such as a construction worker, janitors, butchers, cashiers and cleaners. However, what happens when a serious injury occurs or they’ve reached an age that prevents them from physically being able to perform their job? Health care, disability and retirement benefits are out of the question for undocumented immigrants.
According to Texas Governor, Greg Abbott, Obama’s plan would financially hurt states. The 27 states are suing the Obama administration based on this assumption. Obama has clearly said that those that apply for the programs would pay a fee. Additionally, immigrants would pay taxes and strengthen the economy. “We’ll bring more undocumented immigrants out of the shadows so they can play by the rules, pay their full share of taxes, pass a criminal background check and get right with the law,” President Obama said shortly after announcing DAPA.

Whichever way this case ends, it will greatly impact the immigrants in this country.