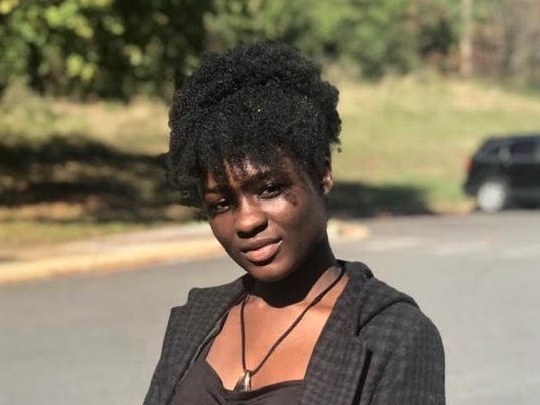 Senior Adwoa Boateng moved to the U.S. at the age of 12. A time where most kids her age are grappling with the difficulties of transitioning into their teen years, it was during that time Boateng made her journey to America.

It was hard for Boateng to move as she had already established a life for herself in Ghana. She had friends she grew up with, a family she was close to and an area she was familiar with.

Boateng’s father came to the United States when she was 10 years old. Upon arriving, he started the process for Boateng, her mother, and brother. Her parents’ decision to move to the U.S. was primarily over finding new opportunities. Her parents wanted Boateng and her brother to have a better education, a better future, and a better life.

Boateng remembers the day her mother informed her that their visas to come to the U.S. were finally approved. She remembers feeling a surge of emotions.

“It was bittersweet, I was happy and excited to see my dad, but at the same time I felt sad leaving my home,” Boateng said.

Boateng recalls the night of her departure as somber.

“Everyone was sad and full of tears,” Boateng said. She says it was especially hard saying farewell to her grandmother, whom she was very close to. She remembers her grandmother making jokes to lighten the mood.

“She kept saying how we might not see her again so to value her while she was still here,” Boateng said. Unfortunately, her grandmother’s words came true, and she passed away a couple of years ago.

Getting accustomed to life in America was extremely hard for Boateng. Living in the U.S. was different in many ways than living in Ghana.

One thing Boateng had trouble with was the urban life of America.

“In Ghana, things were much simpler and calmer,” Boateng said.

One memorable thing that Boateng recalls during her time in Ghana is going out with her family and friends to the river to swim.

“There were no cars around, it was just peaceful and quiet and my family and I would spend hours playing there,” Boateng said.

Another thing Boateng had to get used to was how structured life was in America.

“In America, there are definitely more rules and regulations to follow,” Boateng said.

The most difficult thing Boateng had to grapple with, however, was fitting in. “After coming here, I felt like an outsider and because of that, I alienated myself from the outside world,” Boateng said.

Boateng attributes this to the language barrier. “It was hard for me to confidently interact with people because I was constantly doubting myself,” Boateng said.

Due to the language barrier, school was also difficult. Although Boateng learned English in Ghana, her primary language is Twi. “It was hard to follow the lessons in my classes because I was not proficient in English yet,” Boateng said.

Five years later, however, Boateng is taking the most rigorous courses offered within the school.

She has challenged herself to be an IB diploma candidate and overcome many hurdles. Following this school year, she plans to attend a four-year college and then go to medical school to become an anesthesiologist.

Boateng hopes to visit Ghana again in the upcoming years. “I miss my friends and family very much and I am excited to see them soon,”Boateng said.