Senior Walter Aponte immigrates from Bolivia to the United States 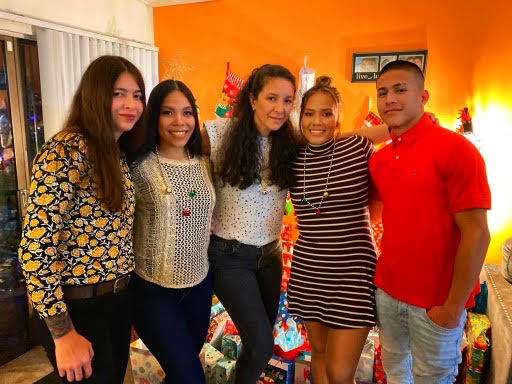 Senior Walter Aponte (far right) poses for a picture with his family during Christmas.

Senior Walter Aponte started his immigration journey from Bolivia to the United States in August 2016.

He and his mom decided to immigrate so that they could have a better future with more opportunities.

“Where we used to live, we had way less opportunities than here,” Aponte said.
He mentions how drug use is a major problem in Bolivia.

“It’s either you come here to make something good of yourself or you don’t and just fall on drugs,” Aponte said.

When Aponte first arrived, everything was very new to him.
“I didn’t know anything or how hard the life of an immigrant would be,” Aponte said.
He remembers thinking to himself: “So this is the United States, the country of opportunities.”
While many AHS students who have immigrated had the opportunity with every member of their immediate family, Aponte did not.

However, he did not let that bring down his spirit.
“When it comes to leaving my home country, I was leaving my dad and family, but I was still excited to come,” Aponte said.

In his first few years, Aponte found that learning a new language would be an obstacle for him.
He knew almost zero English when he first immigrated.

“At first learning English was hard, but then I picked it up quickly by just studying by myself,” Aponte said.
Not only did Aponte face obstacles, but his mom did too as well.

“My mom especially had trouble finding a job,” Aponte said.

Looking back on his life in Bolivia, he notices that the U.S. and Bolivia are very different countries.
“I don’t see any similarities. Everything is completely different,” Aponte said.

Since 2016, Aponte has adapted to living in a new country very well. “I’m more used to living here than over there in my country,” Aponte said.

“I enjoy school and work because it’s just a different environment.” Aponte said. Aponte is a devoted soccer athlete.

He currently plays soccer outside of school and also for the school’s soccer team. Outside from the school environment, Aponte enjoys going to work, working out, and doing soccer training.

Ever since Aponte immigrated for the first time, he hasn’t been back to Bolivia at all.
However, coincidentally he is currently visiting his country now.