What was life like Afghanistan before moving to America? 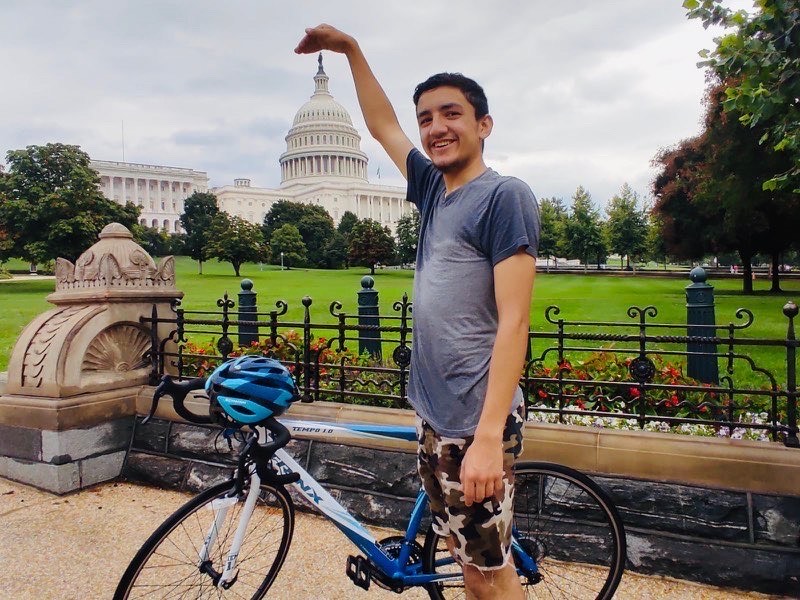 Luddin visits the Congressional Building with his bike.

“It was really bad. We couldn’t come at the same time with my whole family, so I came with my three sisters, one brother and my dad while the rest of our family stayed there in Afghanistan,” Luddin said.

Afghanistan has gone through several dangerous acts in the past years. Afghans are unable to leave the country due to how risky it can be with the ongoing violence. Before Luddin moved to America, he got a recommendation from his friend back in his home country.

“I met him and started working at Mcdonalds with him. We went to America to learn the language, to
learn the culture and to see how the people are,” Luddin said.

When Luddin first arrived in America, his friend was the one translating everything to the people and whenever
his manager asked him any questions. Luddin was determined to learn more about the language in school.

“When we first came to school it was virtual. We had to work hard to have good grades and at the same time learn the language,” Luddin said.

Education in Afghanistan was different. Technology wasn’t provided for students, but in America, everything
had been offered. America had more beneficial opportunities.

People are willing to leave everything behind to receive a better education whether it’s for themselves or for their loved ones. Luddin had left his family because he wanted the education they did not get.

“I have been here in America for almost two years with my four siblings and my father. My father has been
here for 12 years,” Luddin said.

Luddin’s father had moved to America before his family came in 2019. While Luddin was in America, he had learned that not everything was going to be the same and he would have to adjust to the new country. The people, culture and heritage were different.

“We came during the pandemic when Covid had started. I didn’t know any English. When I came here, the language, the people and quite almost everything was different for me,” Luddin said.

Luddin had managed to adjust to these new environments. He was able to learn English and become the translator for his younger siblings.

“Now I am able to speak English properly. I was able to learn four languages. English, Spanish, Pashto and Farsi,” Luddin said.

Luddin had also developed several skills while in America. Not too long ago he was unfamiliar with America and the ways people did things the way they did. Fortunately, Luddin was reunited with all his family members in Annandale. Two months earlier they had moved to America as well.

“I went with my friends to the Shenandoah National park. I loved biking in Washington D.C and I always enjoyed hiking,” Luddin said. Moving to America and leaving their home behind was something Luddin and his family decided to do. It was one of their most memorable decisions made.

Luddin hopes that in the future he will be more successful than he is already. The opportunity for a new chance at life was given to him. With that, he was able to get a job, attend school and live with his family after years of separation.

“I am doing very well. Our manager gave me the promotion. I am only 18, but Inshallah I will work as
the manager there,” Luddin said.

Although the new changes in Luddin’s life was considered odd for him at first, he was able to achieve
the future his family wanted for both him and his siblings, to receive better education in America.