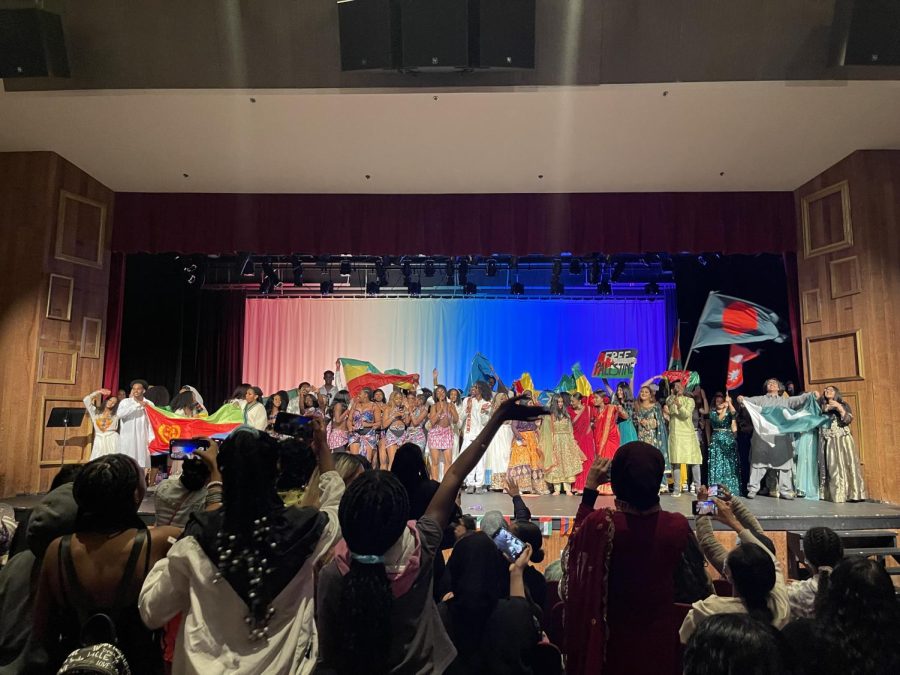 Students gathered on stage for a rendition of “We are the World” where all cultures were gathered as Heritage Night sold out all tickets on March 11th.

AHS is one of the most diverse schools in the entire county with over 74 countries represented and over 55
languages spoken. Students at AHS had the chance to display their cultural clothing during Heritage night.

Heritage Night is a most popular event where students were able to showcase their heritage and culture on stage displaying several ethnicities. The annual performance showcased the school’s diversity.

The clothing consisted of several different cultures from around the world. Various countries had their own cultural outfits and dances along with their traditional music including Ethiopia, Somalia, Afghanistan, Vietnam, Bolivia, Palestine and more were all showcased in the fashion show.

The unique cultures from countries all around the world made Heritage Night possible. Latin America, the Bolivian dance Salay consisted of tapping, singing and clapping through the dance. The dance is characterized by its joyful music and movement of the shoulders, swaying the heads of the dancers. The men wear a hat, a vest, a sash and leather shoes. The women wear the same colors but with a colored sash, a skirt and medium heeled shoes.

“On Lunar New Years, we wear a dress called an Ao Dai, worn by both men and women,” sopho-
more Audrey Nguyen said.

The Ao Dai is a traditional dress in Vietnam where silk tunic pants are worn by women and men. The Ao Dai is worn for special occasions such as Tet and New Years. It symbolizes beauty and elegance.

The traditional clothing for women in South and East Asia is the Saree dress. The Saree is worn with choli tops and with a long skirt worn with the choli as well. The dupatta scarf is called a ghagra choli. The Saree can be considered a necessity for women to preserve Indian tradition within their state and culture.

“There are varieties of dresses similar to the Saree such as the Salwar Kameez and the Lehenga,” freshman
Nafisha Ahamed said.

Similar to Vietnam, the Palestinians wear the dresses that reflect off of their class and social status.

Each country has its own diverse and unique culture. AHS gave students the opportunity to showcase their heritage. Several countries had similar dresses and others had different patterns. The diversity brings students clos-
er to each other and inspires them to express their culture and define who they are by representing their country. The difference in heritage makes students stand out as individuals.

“I had a really fun time at Heritage Night and being able to show my country to so many people is what made it fun,” Amdemeskel said.

This was the first in-person event at AHS due to the pandemic cancelling Heritage Night in the last two years since 2019. This year, Heritage Night returned with a full audience and a sucessful showcase of diveristy. Seniors danced for the last time and made sure that both the performances and showcases were perfected.

This reconnected AHS despite the variousnew circumstances.