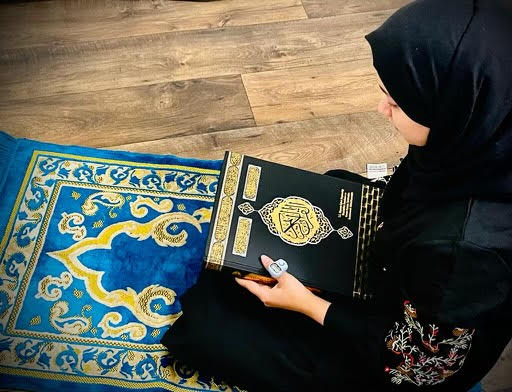 Sophomore Khujasta Basiri prays with her mat and reads the Quran 5 times a day.

Ramadan is the ninth and holiest month on the Islamic lunar calendar. The holy Month of Ramadan is where Muslims have religious obligations to fast every day for the whole month of April from dawn to dusk.

Those fasting days sustain Muslims from eating, drinking and sinning. There are various reasons why Ramadan revolves around the need to fast every day.

“Those who are exempt from fasting are children, the sick, elderly women and travelers. Muslims aim to grow spiritually and become closer to Allah and their loved ones by fasting,” freshman Aysha Ali said.

Fasting is an act of worship. The act is considered one of the pillars of faith and it’s a way for Muslims to show their devotion to god. This strengthens the relationship with their creator as well as it reminds them of the things they have to be grateful for. Fasting teaches Muslims to practice patience, not only will it help them whenever it comes to religious terms, it also allows Muslims to break unhealthy habits and form healthier ones.

“After we fast, Muslims give charity and read the Holy Quran,” freshman Safa Touri said.

Ramadan is considered a month where Muslims are encouraged to volunteer and to give charity to those who are less fortunate. This also motivates Muslims to grow as a better person and to better their communities.

There are different types of drinks as well. Drinks like yogurt and jallab, kallab is a type of fruit syrup that is mostly popular in the Middle East made from carob, dates, grape molasses and rose water.

“We would wake up early to eat and pray, this is called Suhoor or Sehri and until then you can’t eat until Iftar which is when you break your fast,” freshman Nafisha Ahamed said.

After all the food and the drinks Muslims have, they later eat sweets and tea. Tea is considered the most important necessity after food, and it’s commonly known in all Middle Eastern families. Sawm is the fourth pillar of Islam. Sawm is known for the Ramadan month long fast Muslims do.

The four other pillars are the Shahdah, Salt, Zakat and Hajj. The Shahadah is the declaration that Allah is the only god. The second pillar is Salat, the five prayers Muslims say everyday. The third pillar is Zaka when Muslims become charitable and give to those in need. Following Sawm, the fifth pillar is Hajj, a pilgrimage to Mecca.

“Fasting is well known for one of the five Islam’s pillars. It’s a form of self-control and is obligatory for all Muslims. This includes Muslims who have reached puberty and are physically capable,” sophomore Roya Danishyar said.

Other than fasting, Ramadan helps students become closer to their families and their loved ones. It helps lead Muslims to their ultimate reward which is the pleasure of Allah. With the Quran, it becomes easier to be linked during Ramadan. For Muslims, it devotes as much time as possible in reciting the Holy Quran which also spends even more time both day and night praying and strengthening the bond with Allah.

“Muslims abstain from using bad language, listening to music and any other bad habits or distractions,” senior Dima Dib said.

As Muslims abstain from committing any sins, Muslims have been able to strive to break bad habits in order to replace them with good ones. All Muslims wait for this month to cleanse their souls and heal their hearts. Once Ramadan ends, Muslims celebrate the closing of the month with Eid al-Fitr.

“Culturally, we are cooking different delicious foods and breaking our fast with dates and water,” senior Khujasta Basiri said.

The celebration marks the end of fasting and gives thanks for the strength Allah has given during the Month of Ramadan. With the closing, Muslims dress in their finest clothes as well as give gifts to children and continue to spend time with their family.

“We eat at home with our family and sometimes we have a family gathering which adds a bit more fun to the month of Ramadan. There are various reasons why Ramadan can be really fun,” freshman Amani Hassan said.

There are several fun activities Muslims can do during Ramadan. Creating

Ramadan event calendars, making charity jars and making bookmarks for the Quran are just a few ideas. The Quran can also be used to help Muslims get rid of unhealthy habits.

“The Quran is meant for the living, for humans to use as a guidance. This time of the month is a time to feel for the poor and to get closer to Allah, to get rid of bad habits and to be the better version of who we are,” Danishyar said.

Although it is not an easy task, Muslims are able to be rewarded with the cleanse of their souls and the healing of their heart in return. During Ramadan, there are a few do’s and don’ts.

For non-Muslims, do not play loud music as it may offend those who are fasting and those who are avoiding to commit any sins. Do not chew, drink or smoke in public amongst Muslims. This is another triggering habit for Muslim communities that they avoid during Ramadan.

The most important thing that people need to be aware of is the tiredness and the less   productiveness of those who are fasting during this month. This is one of the ways both Muslims and non-Muslims practice their patience with one another.

“Ramadan is a time for all students and for us muslims to come together as a big family, to have a good time together and to enjoy Ramadan Kareem this month,” said freshman Amani Hassan.

Ramadan continues to be observed by Muslims worldwide as a month of fasting, praying and a time to reflect.