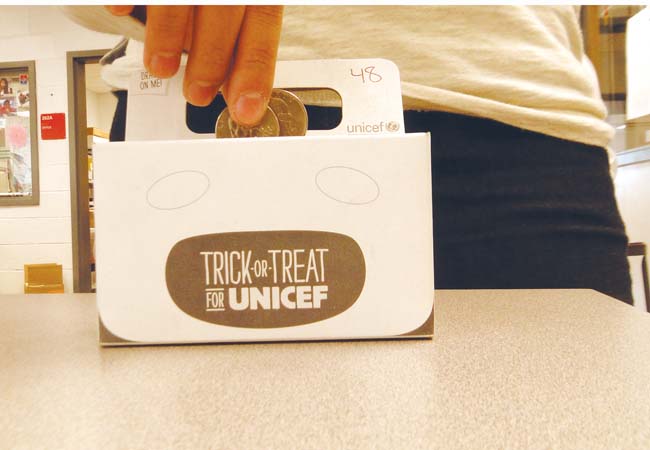 A student donates change to an Eliminate Project box.

The AHS Key Club held its first meeting of the year on Oct. 8. Several service projects were announced, including the Eliminate Project.

The Eliminate Project is a collaboration with UNICEF in an effort to provide vaccines to those affected by maternal and neonatal tetanus (MNT). The disease is often deadly to many mothers and their children, especially in third world countries. Roughly 60,000 people die as a result of tetanus every year.

“What’s most important about tetanus is its severe effect towards the newborn,” junior club president Christine Tamir said. “It wracks the babies with painful spasms that does not allow them to live as long as normal newborns. It ruins the bond between the mother and her baby because a baby’s first interaction is with its mother, and not even the mother’s touch can comfort the babies afflicted by tetanus.”

The AHS Chapter of Key Club has been placed in District 20D along with area schools such as Lake Braddock SS and George C. Marshall HS. The district plans on collecting $15,000 by the end of this year’s event, surpassing the $10,000 earned last year. At the district level, the club has its sights set on beating Lake Braddock SS, which led the district with around $7000 raised the previous year.

Senior Co-Treasurer Wenhui Huang was optimistic about the fundraiser and the prospects of outearning Lake Braddock SS. “It’d be nice to beat Lake Braddock but we just want to raise as much money as we can,” Huang said.

Members were issued black and white UNICEF boxes to collect donations as one of many methods to raise funds for the project. The club has planned bake sales and neighborhood walks as well. In addition, the Lieutenant Governor of District 20D, Raeford Penny, has also proposed competitions within the district such as ultimate frisbee or kickball to acquire proceeds for the Eliminate Project.

MNT is not often a popular topic of conversation in many AHS circles. Most, if not all, infants in the country are administered the tetanus booster shot during infancy, curtailing its spread in the U.S. The club hopes to raise awareness about the disease, as well as collect donations.

“I think it’s pretty useful in raising awareness for tetanus because not many people including me know about it,” sophomore Kiet Do said.

Junior Kristina Nguyen praised the involvement that the Eliminate Project will bring to the chapter’s members.

Nguyen explains, “I think it’s one of the club’s better fundraisers because members can help other people in the community rather doing it just for the hours.”

The Key Club will be selling $2 wristbands to help fulfill their goals for the project. $1.80 of each wristband proceeds are used to provide the mothers 3 boosters to immunize them during their childbearing years. The additional 18 cents would cover the cost to make the wristbands and the other 2 cents go to Kiwanis, Key Club’s parent organization, for future service projects.