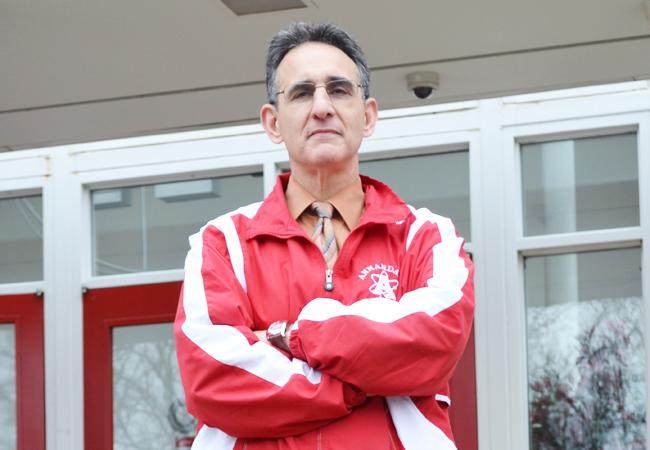 Principal Vincent Randazzo said that even though there has been an increase in concern for school safety, the administration will continue to do all they can to keep AHS safe with policies that are already in place.

Columbine, Virginia Tech, and now Newtown, Connecticut. They are all places that will live in infamy as victims of some of the worst massacres due to gun violence in American history. They have something else in common, though: these tragedies took the lives of students in school.

Around the halls of AHS, students haven’t been able to steer past the inevitable question that no school should have to answer: what if an act of violence were to affect us?

According to a recent survey conducted of 387 students during multiple R7 classes on Jan. 16, the majority of students feel “moderately safe” while traveling to school, in between classes, while in the classroom, and at school-sponsored events, such as at sports events, dances, and plays. This is in contrast to only 33 percent of students that feel “very safe” while in the classroom.

“We have added four security assistants on staff, but it’s not because of what happened in Newtown,” Principal Vincent Randazzo said. “[What happened in Newtown] changes how we see the day and how we’re responsible for one another. This is the one thing I hoped [students] wouldn’t have to think about.”

As these unimaginable tragedies continue to become common news more and more in our day to day lives, the battle on gun rights has sparked controversy throughout the country. Even with the recent threat of gun violence, 66 percent of AHS students “strongly disagree” that school officials, including teachers and counselors, should carry weapons to protect students. In December alone, two students in Fairfax County were recommended for expulsion for bringing a loaded handgun to Robinson Secondary School and a BB gun to J.E.B. Stuart High School.

“Personally, I feel that our schools are as safe as they can be,” PTSA president and AHS parent Kathy Ryan said. “We live in a very crazy world unfortunately and I strongly believe that teachers and administrators do all that they can to keep us safe. No environment is ever one hundred percent safe, but everyone works hard to keep our children safe at Annandale.”

The other disparity is that the onslaught of these mass shootings have not only taken students’ lives, but teachers’ lives as well. Victoria Soto bravely threw herself in front of the shooter at Sandy Hook Elementary School. Engineering Professor Liviu Librescu used his body to blockade the door during the Virginia Tech massacre, giving all but one student the chance to escape the shooter. These are only a couple of teachers that have bravely risked their lives for their students during a school massacre, reminding teachers of the risk they may have to take in a life-or-death situation.

“We’ve got standards of classroom management, we’ve got standards of what to do in
case of emergency, we’ve got meetings on a seemingly regular basis,” history teacher Joe Valentino said. “We just had one last week about what to do in case of emergency, and they’re constantly updating. Some of us would almost think they do too much in this respect, but they feel it’s enough and I certainly do and I feel completely safe here.”

The recent poll revealed that 52 percent of students agree that authority figures, including teachers and administrators, do everything in their power to ensure students’ safety. In contrast, most students said that they “slightly disagree” that AHS performs sufficient drills to ensure students’ safety in case of an emergency, including fire drills, lock-in and tornado drills.

“We conduct the exact number of drills that are required for Fairfax County,” Director of Student Services Jennifer Crump-Strawderman said.

The subject of school safety isn’t just a result of the recent rise in gun violence throughout the country: with the result of the recent Twitter scandal and students’ abuse of social media, rumors of different policies being placed or administration having Twitter accounts to track students surfaced.

According to the poll, after nearly five fights in one week and several suspensions, the increase of physical altercations in school this year has influenced 52 percent of students to question the safety of AHS. The majority of the students who questioned this were sophomores while juniors and seniors followed by 42 percent. This is due to the rise in fights that students have seen this year, as 58 percent polled said that they have witnessed an average of one to five fights already this semester.

Contrary to popular belief and this increase in altercations, the administration does not monitor Twitter accounts.

“We haven’t changed any policies, even after what happened recently with Twitter,” Randazzo said. “No one has an account except the athletic department. Administrators don’t have Twitter accounts to track students. I want one, but only to tweet about certain school events or to congratulate someone on something they’ve accomplished.”

The confession has set many students’ minds at ease, especially for the sake of their privacy on the social media site.

Junior Rebecca Yohannes expressed relief at hearing that the administrators weren’t behind the fake accounts.

“Sometimes I tweet some things that aren’t pleasing to the administrators,” Yohannes said. “So, overall, I’m relieved.”

In contrast to the amount of fights that have risen this year, AHS’s profile states that offenses against staff, students, and other offenses have lowered by 25 percent from the 2008 to 2011 school year. This number dropped significantly from 247 offenses at the end of 2009 to just 61 in 2011. With the results of this year’s physical altercations, however, this number may start to rise again.

According to a recent article by The Washington Post, Fairfax County Public Schools spokesman John Torre said that most schools in the county have an electronic entry system and self-locking doors. All visitors to a school are also required to “register at the front office and are escorted around the property by a staff member.”

Though AHS doesn’t have self-locking doors and visitors are not always escorted around the school, administrators are constantly reporting to different areas in the school that they monitor at various times throughout the day.