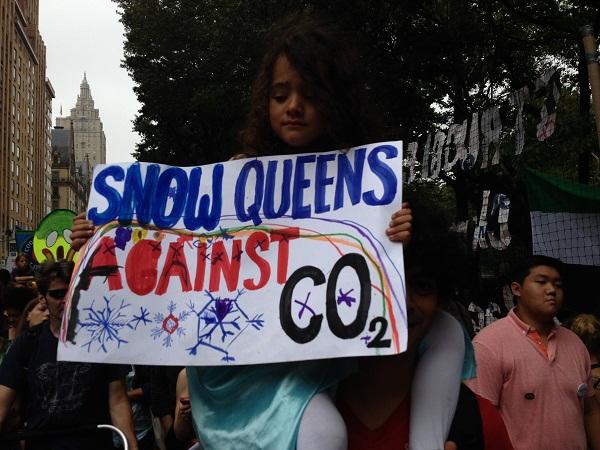 The highly anticipated Peoples’ Climate March was held in central Manhattan in the afternoon of Sep 21. People traveled from near and far to attend the march, including former Vice President Al Gore and actor Leonardo DiCaprio.

Many of the marchers, however, were New York locals. New York native Christina Jung is a medical student at Einstein college of medicine in the Bronx.

“[Climate change] has always been an issue I care about,” Jung said. “Growing up in Chinatown, I was very aware of the need for good sanitation. Now I’m in the Bronx, which is a very different community that has access to clean water.”

Water sanitation is just one of the hundreds of health-related issues that is connected to climate change. In her travels to the Southern African nation of Lesotho, Jung witnessed how climate change affects people’s daily lives and agricultural practices.

“The contrast between the rainy and dry season is so stark that people in Lesotho can’t plant anything. Torrential rains wash away all the crops,” Jung said. “People in Union Square don’t realize that sort of thing.”

Concerned citizens in countries all over the world gathered to make Sunday a historic landmark in the fight for climate justice. The streets of major cities such as London, Istanbul, New Delhi, Melbourne and many others were flooded with climate activists.

In Rio, even the famous statue of Christ the Redeemer was lit with green light to signify the importance of the upcoming U.N. environmental summit.

World leaders are scheduled to meet at a U.N. summit in New York City on Sep 23. The Peoples’ Climate March was planned to coincide with the summit. Climate activists hope to influence the U.N. delegates and push them toward binding environmental legislation.

These ambitions were reflected in the sentiments of two concerned citizens of Westchester County, NY.

“We’re both worried about the future and the kind of world we’re going to leave for our grandkids,” former middle school teachers Chris Osborne and Lorraine Cook said.

Cook went to her first march in 1968 on the National Mall in Washington, where Martin Luther King Jr. gave his monumental “I Have a Dream” speech. She has been attending marches ever since.

A number of organizations and special interest groups were represented at the march. Among them were groups protesting the Keystone XL Pipeline, fracking opponents, clean energy activists, and sustainable agriculture proponents.

“As growers in an urban area, we are a place where people can get advice and tips on how to practice sustainable farming,” Rachel Becker and Jennifer Sloan said. “We make these techniques tangible. We grow enough food in two hydroponic greenhouses to feed sixty families.”

Beneath the pale gray sky of New York City, 400,000 people in brightly colored shirts marched in the movement against climate change. They represent only a small fraction of an endangered species that is on the brink of self-destruction.

Will you help save the human race?