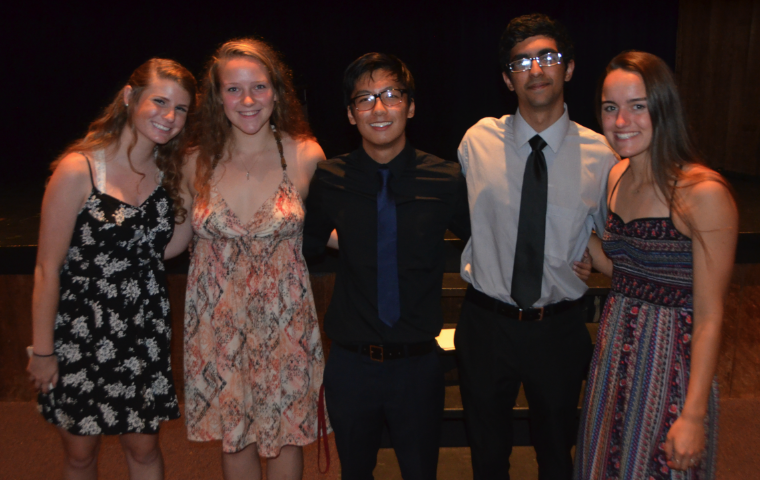 The AHS IB film class presented its annual film festival on June 15. The festival featured various student-made films that covered a range of genres from documentaries to comedies.

The event was judged by both the audience and a faculty judge panel. After all the films were presented, seniors like Bailey Oliver, took most of the night’s awards. Oliver’s film “The Moment” was given  three awards: Jury Prize, Audience Choice Runner-Up, and Best Screenwriting.
“The Moment” followed a family whose son was seriously injured in a car crash. The film was dedicated to AHS alumnus Mark Slough who attended Virginia Tech and died in a fatal bicycle crash October of last year.

“Honestly when I first won jury prize I wasn’t able to fully grasp the accomplishment of all my hard work,” Oliver said. “It wasn’t until hours later that I was able to fully appreciate and feel proud of what I had done. I’m truly happy that I won and that the audience and Judges were able to appreciate my art.”

The audience voted for their favorite film and “Up the River” was chosen as Audience Choice. The film also won runner up for Jury Prize, best cinematography, and featured senior Natnael Weldigorgios who won Best Actor. The comedy written by seniors Shank Rai and Ahmad Ayub featured two thieves that were caught in the act of stealing and followed with more hilarious events.

“I wanted to chose a comedy because I want to make films that entertain people,” Rai said. “Having a genuine reaction from the crowd is what I look forward to after every film. My crew was carefully selected because I wanted to portray that type of image.”

Other awards were given to different genres and categories. Best documentary was given to seniors Ashley Britton, Sarah Deible, Katie Pacak, and Summar Ayoub for their film, “Pocket Change.” the documentary brought awareness to the problem of homelessness in D.C.

The award for best editing was given to junior Jessica Smith for her film “The Dangerous Power of Social Media” that revealed the various issues that social media raises.

Best actress was awarded to senior Stephanie Solorenzo for her comedy “The Excuse” that highlighted the struggles students go through to get to school on time.

The event displayed the great talent and effort the students have put forth in the class this year. The variety of genres and emotions portrayed in the films kept the audience entertained. It was also a wonderful opportunity for the film program to raise funds. The festival was a fundraiser and rose around 600 dollars due to admission from the 100 people that attended.