Is technology making us dumber? 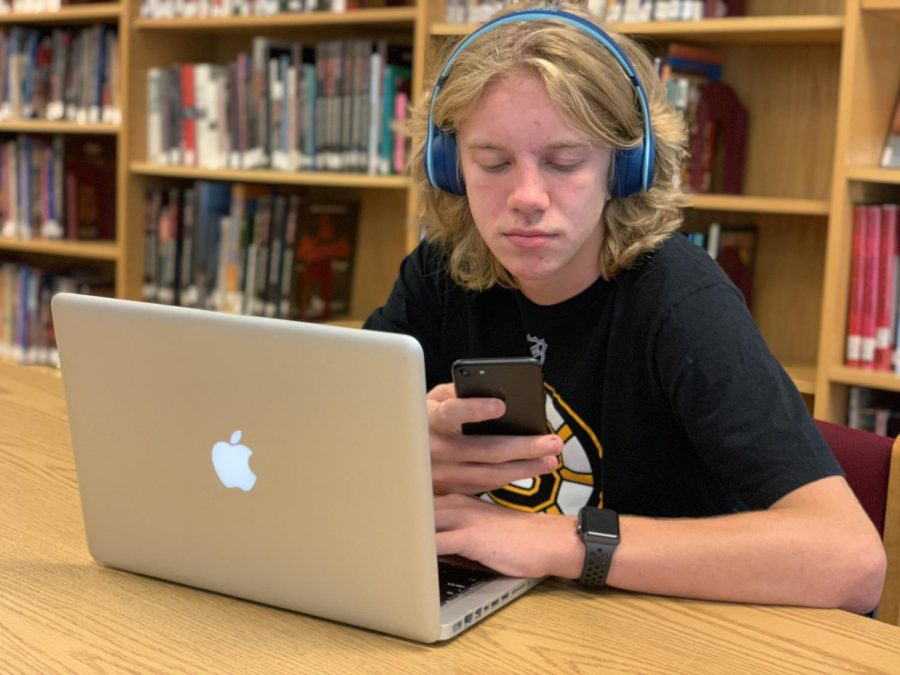 Senior Patrick Brown is an avid user of tech gadgets and is always one of the first students to pick up newly released devices such as phones, laptops and more.

Every day when senior Patrick Brown gets home from school, he plops down on the couch in his living room and turns on his iPhone.

He starts out by reading messages from his friends and then quickly clicks away to Snapchat and Instagram to check out stories and posts from throughout the day.

Being completely oblivious to his surroundings and time, Brown eventually realizes that the clock has struck 8 p.m. and he has yet to begin any of his assignments, projects or study for any upcoming tests.

This is the unfortunate reality faced by many students not only at AHS, but across the country. The rampant progression and advancement of technological devices over the past decade has come with a wave of negative effects on the daily lives and teenagers.

Teens have found themselves not only procrastinating at home due to the distracting nature of tech devices and gadgets, but have also been inattentive and absent-minded in the classroom during the school day.

The convenience of recently developed devices has not helped in reducing such distractions.

For Brown, who always remains up to date on new releases, having access to various forms of technology like his iPhone, Apple Watch, AirPods, MacBook and more has provided a certain degree of convenience.

“I use my devices for everything from entertainment and having fun to doing school work,” Brown said.

There is no doubt that such cutting-edge devices have improved user experience and refined functionality. However, it is also evident that the latest devices on the market are preventing youth and teens from remaining on task.

Distractions from technology have also become prevalent in the classroom over the past decade.

Whether it be during lessons, tests, quizzes, etc. a multitude of students can be seen with their headphones or earbuds in during class and trying to hide their phones under their desks as they click away.

“I probably would consider technology a distraction in the classroom because it can do so much more than what a teacher can talk about,” Brown said. “Sitting in class without much to do makes you feel inclined to start using your phone.”

With students constantly needing to fulfill their irresistible urge to pull out their phone or laptop, many have paid less attention in class and tend to easily lose focus.

History and Social Studies teacher Jonathan York implements a couple of different methods to prevent technological distraction in his classroom.

When a student is using their phone during class or when they are not supposed to, York asks them to place their phone inside the cell phone pocket pouch at the front of the classroom. The student can then retrieve their phone at the end of the period.

“Technology is a huge distraction in the classroom and cell phones have become a major problem,” York said.

However, some teachers at AHS take a different approach when it comes to using technology in the classroom.

“For me, implementing technology into teaching has re-energized me and allowed for so many different activities that have engaged students more,” Mathis said.

Examples of technology being used with lessons in Mathis’ class includes the use of Virtual Reality with a book read in class and having school wide scavenger hunts with iPads. Other ways in which technology has been integrated into teaching is through students making short videos and podcasts.

“I think using technology gives students more of an opportunity to show what they know and prepares them for what lies ahead of them,” Mathis said. “Technology is not going away and preparing them to know how and when to use it now is only going to help them later in life.”

Despite the more engaging lessons for students, using technology in the classroom still has its drawbacks.

“There are definitely some downsides to using technology in the classroom because students are not always using it the way that they should,” Mathis said.

With the debate over technology and whether it is harming the minds of adolescents raging on for the past years, multiple researchers and studies published have displayed significant results.

In a study published in the Journal of the Association for Consumer research, students were asked in an experiment to take tests that required close concentration with their phones either stored in their desks or in another room.

The test measured brain capacity of the students and ability to process data.

Students whose phones were stored in a different room performed better on the test than those who had their phones nearby in their desk. Scientists at the University of Texas, Austin believed that this study reveals the drain phones are having on young minds and displays the limiting of cognitive resources.

Research from Columbia University professor Betsy Sparrow, PhD, revealed the use of technology is hindering individual’s ability to remember and recall information.

According to the study, search engines are improving human ability to remember how to search for and where to find information, but however are worsening the ability to recall the information itself.

In spite of these studies, many continue to defend the use of technology arguing that it allows for the expediency of daily tasks and provides quick access to knowledge and information via online searches and answers.

Some also maintain that technology is the way of the future and it is required for individuals to attain skills needed to use it as it will be necessary for many jobs in the time ahead.
Despite the debate, it is undeniable that technology is bound to continue to advance and will most definitely not be going away anytime soon.