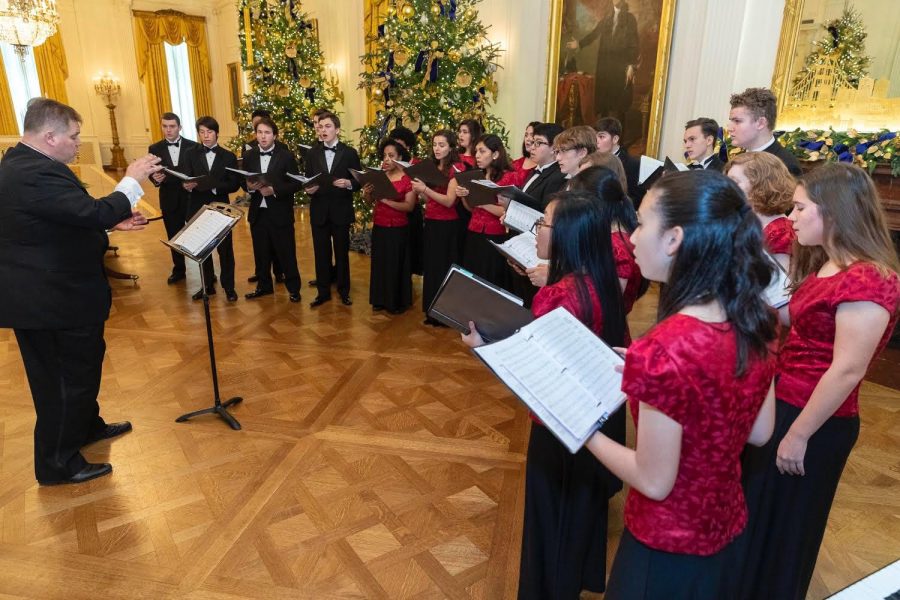 Senior Alene Boghosian woke up as she would any other day and went on through her morning: rode the bus to school, attended her R1 class and her R3 top choir class; the only two classes she went to on Nov.29, because of the field trip that Annandale Singers attended at the White House for their Christmas Tour.

On Nov. 29, AHS choir students are going to the White House to perform 10 of their songs to celebrate the holiday season. These songs include “Here We Come A-Caroling,” “Lully, Lulla, Lullay,” “White Winter Hymnal,” “Deck the Hall,” “Season of Light,” “Pat-a-pan,” “Have Yourself a Merry Little Christmas,” “Carol of the Bells,” “In dulci jubilo,” and “Jingle Bells.”

Though they sang in such a prestigious and notable location, they prepared for their performance as they would any other concert or gig; of course with a different audience.

“I think that it was a great honor. I had a couple of kids say that they don’t want to go up and support the White House, but this event did not involve anything politics related,” said choral director Patrick Vaughn. “It was an opportunity for us to share something that’s very positive and to put that into a place where there are negative things happening…to bring in some lightness in the White House.”

Each Annandale singer had to fill out a simple form with their social security information and legal name in order to participate in the performance. The performance was made possible with the help of two choir students’ parent, Joyce Boghosian, who is a staff photographer for the White House.

“Although [my mom] has been on and off throughout her years working there, she started interning for Ronald Reagan when she was 19 years old,” said Boghosian.

Now, years later, Boghosian was able to offer the open slot for performers at the Holiday Tour to our very own Annandale Singers, the top choir group in the school. They were able to skip the application process to perform at the White House because of their invitation; hopefully this won’t be the first and last year performing. Either way, it was a true honor to not only perform at the White House in high school, but also being the first performers to kick-off the Holiday Tour.

“For the Holiday Tour, people are able to come walk through the White House and see all the various decorations. While that was happening, they had various musical ensembles, both instrumental and vocal that were doing concerts as people were walking through,” said Mr. Vaughn.

For most people, singing in such a place, surrounded by years worth of political figures, can be very nerve racking and a bit stressful, but the Annandale Singers have prepared their various songs since the fall choir concert that took place at the beginning of the school year.

“Being able to perform for the Christmas Tour can be very competitive, but I feel like our choir was in a good place to be able to sing these different songs in acapella,” said Boghosian, “We put in our all when performing for the audience, and that’s what counts.”

All in all, their performance at the Holiday Tour was one for the books, for they brought some holiday cheer from AHS to the White House.