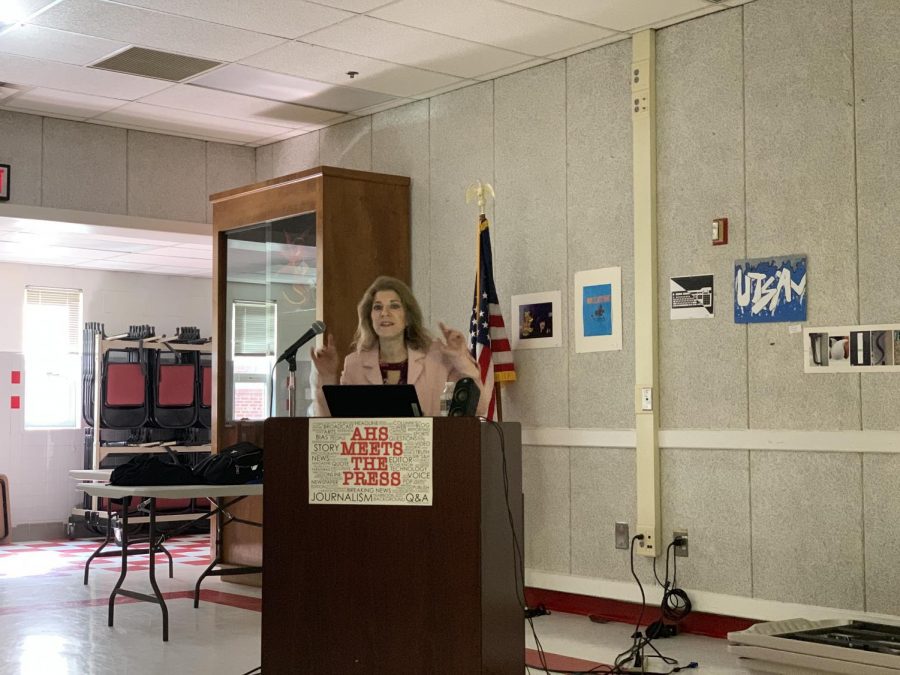 Presutti spoke at the event on Feb. 26.

Carolyn Presutti, an award-winning reporter who works out of the Voice of America’s Washington headquarters was the guest speaker at the third “AHS Meets the Press” of the school year. The event held for student journalists took place on Feb. 26 in Clausen Hall.

Presutti has won numerous TV, Raido, Multimedia and Digital awards for her TV and Web coverage of The Syrian Medical Crisis, Haiti, the Boston Marathon Bombing, Presidential Politics and more.

“I really enjoyed listening to the presentation she [Presutti] gave because it was really insightful,” senior Abu El-Sadeg said. “Learning about her experiences and what it was like covering certain events was intriguing.”

Presutti shared experiences from how she initially found interest in journalism and how that led her career in covering various topics for VOA today.

“I started out because I wanted to give speeches everyday,” Presutti said. “I decided to start giving speeches in my school and whenever I had the option of writing an essay or giving a speech, I always chose to give a speech.”

At Voice of America, Presutti was a Nathanson Scholar to the Aspen Institute and VOA’s delegate to the U.S. government’s Executive Leadership Program. Recent videos produced by Presutti include news on hate crime statistics and tracking two freshman members of the House of Representatives, Rep. Katie Porter (CA-45) and Rep. Pete Stauber (MN-8)

Additionally, Presutti has covered local events including a multi-part series video that she shared with the audience regarding a sex trafficking victim from the D.C. area.

“I thought the some of the events and stories that she shared with the audience had to have taken a lot of courage and effort to cover,” El-Sadeg said.

VOA is the largest U.S. international broadcaster and serves as the United States federal government’s official institution for non-military, external broadcasting. Founded in 1942, VOA broadcasts in over 40 different languages around the globe.

Throughout her presentation, Presutti took a number of questions from audience members who inquired about her coverage of certain events and how she became interested in journalism at a young age.

“I love speaking with young, aspiring journalists because of the questions that everyone asks and the fact that I can leave everyone with something to learn.”