Your Life on the Line 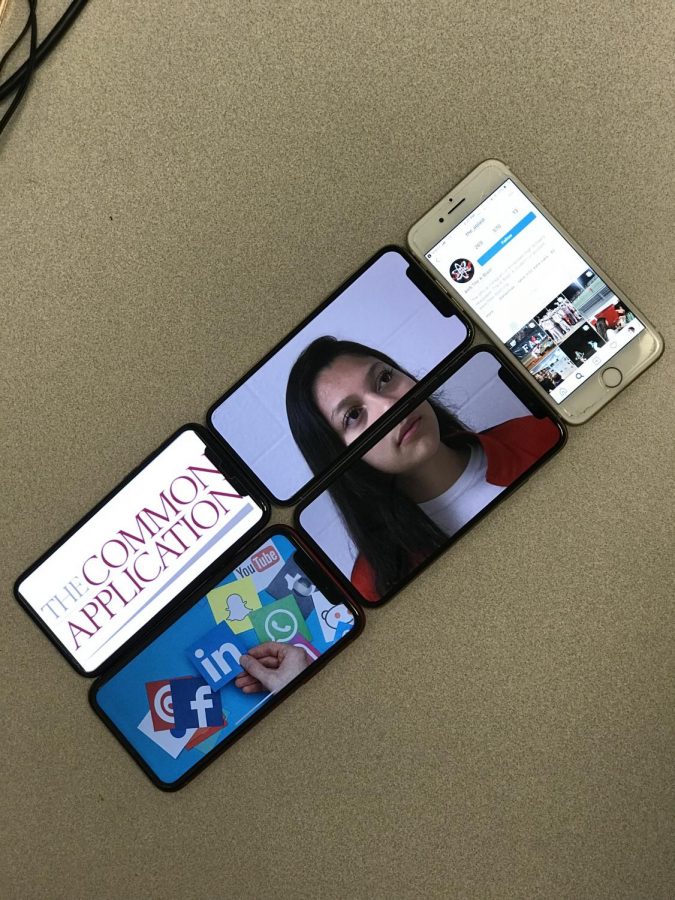 When senior Andrew Izquierdo wakes up, his iPhone 6S is next to him. It’s the first and last thing he sees, spending at least six hours daily on it. He has push notifications for Snapchat, Instagram and Twitter. Like many teens, he has the common habit of always having his smartphone to post about his day publicly.

His daily feed consists of casual remarks about people’s days. Sometimes his feed shows profanity, vulgar speech and images. A common trend is for students to rant or expose others either in private stories or accounts.

“I do express my opinion and emotions a lot. However, I limited a bit of what I say because word gets out easily,” Izquierdo said. “People can post whatever because, why not? But one thing that annoys me is when social media becomes a diary for some people. That’s when things get explicit and unnecessary.”

Adolescents can be impulsive when it comes to expressing personal information, and sharing it online can affect their future.Even though posts can be deleted, they may not be gone forever.

Inappropriate messages, posts and texts can still go viral or be saved by users on the other end. Colleges and employers are beginning to take notice of student’s digital footprints.

According to a survey conducted by Kaplan Test Prep, that approximately 25% of admissions officers from various colleges and universities around the country monitor the social media profiles of applicants. Everything from Instagram to Snapchat stories has quickly become a part of the review of applicants.

Just two admission cycles ago, Harvard rescinded admission offers to at least 10 students after discovering obscene memes that were exchanges between the students via a private Facebook group chat. The prospective Class of 2021 students who lost their opportunity to enroll at the prestigious university also exchanged sexually explicit messages that sometimes targeted minority groups as well.

Careless posting can cause for college applications to be revoked, disqualification from jobs and ruined reputations. Even after being accepted, an individual’s digital footprint can still be monitored.

“Stop the nudes, compromising photos, videos of drug use, and drinking because it might be funny now, but in 15 or 20 years when you’re trying to get a serious job, these things can come back,” School Resource Officer Adam Curcio said. “There are some things that don’t need to be documented.”

Smartphone users spend the majority of their time on social media. It offers a digitally interconnected world with access to world news and endless updates. Snapchat is currently one of the most popular applications among teenagers. What makes the app appealing is its unique feature to terminate Snaps once they’ve been opened. Snapchat seemingly allows its users the most privacy by controlling what others can and cannot see.

“Most kids I’ve seen who’ve gotten in trouble for the cases that dealt with [social media], is [the assumption that] just because they sent it on Snapchat or some other platform, it will remain private,” Curcio said. “The reality is that even if it disappears or even if you send it, some of them keep it on their servers and we’ve been able to recover some of these images on Snapchat.”

“As far as nude pictures, [it can] always be a serious crime and have the potential to be a serious crime. It’s a felony offense regardless if you send it or if you receive it from someone,” Curcio said. “If your nude is uncovered and you’re a minor, and that it can be determined that it’s you, it’s a felony.”

Most cases can fall into a misdemeanor but can become a felony depending on various factors of Code Sections, such as being done repeatedly, having malicious intent and having the means to carry it out.

“I’ve seen accounts that post gruesome things throughout my years here like weed, drinking and smoking,” senior Vinh Tran said. “I’m glad I don’t participate in those activities and it made me realize I don’t want to do those things in the future.”

The Youth Survey also recorded students who believe they have the right to say anything online with 7.5% of 12th graders reporting they strongly agree while 32.7% strongly disagreed with this statement.

Adolescents should be conscious of how social media gives a first impression. According to Forbes, more than a third of all employers evaluate social sites as part of their hiring process. Many times, individuals are not hired due to the public information posted on sites such as Facebook, Twitter, LinkedIn and any site with one’s name.

“I’ve definitely posted some things that I regret,” junior Hakim Idris said. It’s really awkward when someone brings it up, especially when it’s a long time ago. Even if I forgot it, someone will remember it or have a screenshot of it. Then I immediately delete it afterward.”

Ever since freshman Sophia Marigliano got her iPhone 4S at the end of the seventh grade, she primarily uses it for texts and calls. Marigliano is one of the few teenagers who does not have any social media accounts.

“The reason I don’t have social media is that I’ve never felt a compelling urge to share every little detail of my life with everyone. I have a sense of privacy and I know people spend hours a day just replying to people on Snapchat or scrolling through Instagram,” Marigliano said. For her, the lack of social media does not impact her social life or disconnect her with others. Marigliano finds more time to manage school with track practice and social life.

“If I don’t have my phone with me, then I don’t have to constantly be looking at posts. I have more time and I can focus more on my schoolwork,” Marigliano said. “It has such little effect on your life. You can text friends and it’s the same effect as Snapchat to communicate the same ideas to them. Just because they are not seeing what they’re seeing at any given moment, doesn’t mean that you can’t communicate or have a good relationship with them.”

Once it’s posted online, it’s public information for anyone to see and evaluate.The network of social media can also be a paradox. Someone can appear to be social with numerous followers, friends or living an ideal life, but this is far from reality. It is possible that the more time spent on social media could lead to an increase in depressive symptoms.

Last month, a study done by EClinicalMedicine evaluated the correlation between social media use and depressive symptoms in 14-year-olds. In comparison to teens who use social media about one to three hours daily, those who spend more than five hours a day had a 50% increase in depressive symptom among girls and 35% among boys.

EClinicalMedicine linked the increase in depressive symptoms with the possibility of social media impacting sleep and low self-esteem. It can also be connected with cyberbullying. In FCPS, 10.7% of 10th graders reported as having been cyberbullied in the past year compared to 9.8% of 12th graders. Both numbers are approximately 4% below the national average.

“Cyberbullying, just like any type of bullying, is serious. If a student does not feel safe at school in their environment, they are not going to be available for learning,” Social Worker Alissa Green said. “In terms of cyberbullying, make sure an adult knows, a parent. Make sure that you are going and seeking help from a trusted adult, whether that’s a parent, teacher or an administrator.”