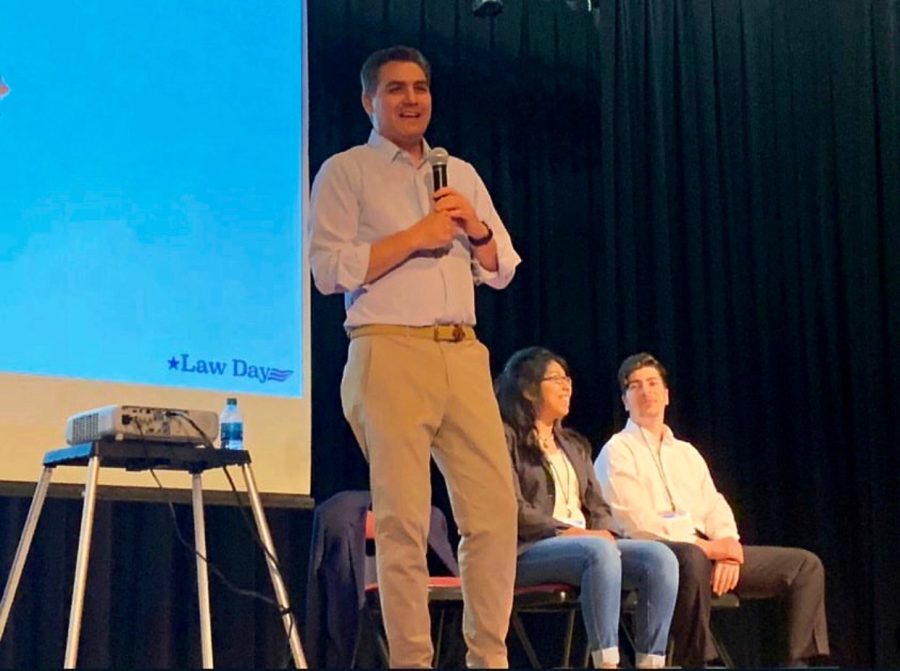 For the very first time ever, the American Bar Association visited a high school, AHS, on May 1 to celebrate Law Day 2019. Along with the ABA President Bob Carlson, students were joined by CNN’s Chief White House Correspondent Jim Acosta, elected officials, and other leaders.

Held annually on May 1, Law Day is a national day that allows individuals across the country to have a better understanding of the law and legal processes that protect our rights and freedoms. The theme for this year’s Law Day  is “Free Speech, Free Press, Free Society.”

The event was organized by Government teachers Meg Richburg and Kellie Burke, who received a round applause for their efforts. Law Day started off with Principal Tim Thomas thanking all the guest speakers for coming to be part of Annandale that day. He also introduced all the guests who were in attendance, two of which were parents of former and current Annandale students. Before the main event began, Carlson educated the students present on some of the fundamentals of law and how it relates to journalism; Jim Acosta’s territory.

During the student dialogue that took place during W4 in the auditorium, Co-Editor in Chief Jude Nanaw and the Arts Editor Galilea Sejas served as representatives for The A-Blast. As an AHS class of 1989 alumnus who was also a journalist for The A-Blast, Acosta shared with the audience his take on the First Amendment rights when it comes to journalism.

When asked about how he decided journalism was for him, Acosta responded: “I think that my experience at The A-Blast, in the case of the Pink Floyd mural that was one of those stories, that created for me a desire to strive a whole people accountable, our officials accountable, in this case a teacher that painted over a mural without talking to the students. It’s that kind of belief that the people who are in charge of us ought to be held accountable.”

Additionally, students in the audience were able to participate in the event by asking Acosta questions. A question that received cheers from the audience was, “What do you think of the Mueller Report and do you hate Trump as a person?” Acosta responded with a professional answer which also caused applause to ensue: “I don’t hate Trump as a person, just the things he says.”

As Law Day 2019 was wrapping up, students were surprised to see a special appearance from Virginia Lieutenant Governor Justin Fairfax. All in all, AHS students received a unique experience while also learning about our national law and Annandale alumnus Jim Acosta’s views.

However, the visit to AHS was just one of four events in celebration of Law Day around and in the Washington, D.C. area.

From 1:30 to 2:30 p.m., Carlson was interviewed by Law Librarian of Congress Jane Sánchez about the topic of free speech at the Library of Congress.

From 4:30 to 5:30 p.m., the ABA Survey of Civic Literacy, a survey that measures how much the public has an understand of civics and constitutional issues, was released at the Newseum.

From 6:00 to 7:30 p.m., the Leon Jaworski Public Program was held, where panelists had a discussion in regards with the current condition of free speech and freedom of the press.

By partaking in the celebration of Law Day, Americans learn to have a greater appreciation for the personal rights they exercise on a daily basis, a privilege that not many individuals in other countries can claim.