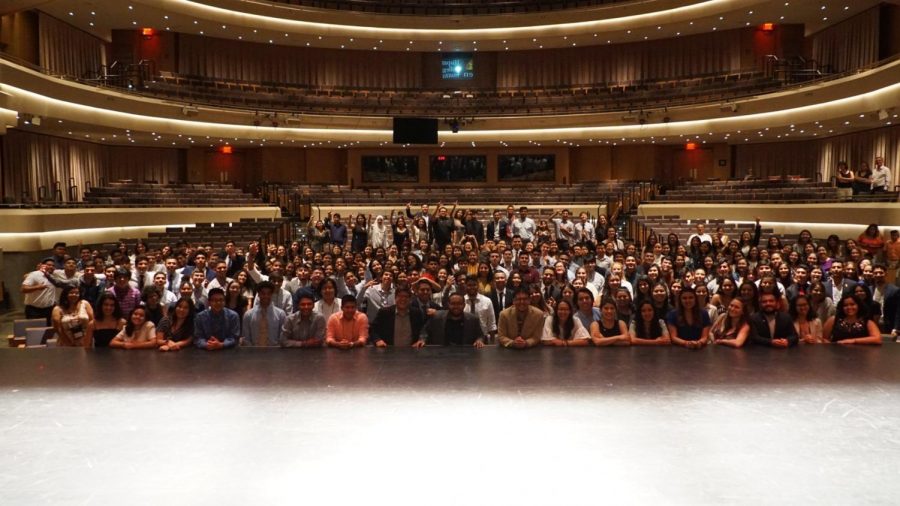 With approximately 150 Latinx students across all of Virginia attending this four-day, three-night pre-college empowerment program, we participated in different workshops and activities designed to build our confidence and provide practical tools to help us along the pathway to college.

For some of the students attending, it would be their first time living on campus, visiting a campus, or even being away from their family and friends. Yet, the most nerve-wracking thing for us was meeting complete strangers that would be their “familia,” or a family consisting of 3-7 individuals with a lead and a junior lead.

“I was nervous on the way there because I didn’t know what to expect,” Sanchez Quiero said. “Knowing that I had people from my school going helped me relax because I knew that I wasn’t going alone.”

On the first day, students arrived around noon and were greeted by HCI’s volunteer leads and junior leads. Once checked in and settled into their dorm rooms, we were led to the Moss Arts Center, where the opening ceremony was held with guest speakers, including the representative of Virginia’s 31st district in Virginia’s House of Delegates, Elizabeth Guzman, and VALHEN President Juan Espinoza.

Afterwards, the students were split into their assigned familias, being the first time that each one met the people that would be their company for the next couple of days.

The rest of the week consisted of workshops held by a variety of speakers, from HCI leaders, college admissions officers, and even J.A. Rodríguez, Jr., the Chairman of the Board and CEO of the Voluntary Protection Program Participants’ Association (VPPPA) Inc.

Moreover, students were also given the opportunity to compete for scholarships while at HCI.

One of the opportunities was a speech competition, in which students wrote an essay, which was to be submitted before arriving to HCI, in response to the prompt: “We are the children of immigrants, who sacrificed their goals and dreams so that their children could have a chance at the American Dream. What does the American Dream mean to you? What obstacles have you had to overcome to be where you are today? And how will your plan to pursue higher education enable you to make the American Dream a reality that for many is still considered a dream.”

There were a certain number of speeches that had been chosen by a panelist of judges, who had decided on who was to move on to the following rounds, until they reached an agreement of first, second, and third place winners.

A second scholarship opportunity offered by VALHEN was the talent show, which was held at night on July 20. However, in order to participate, interested students had to audition the previous day, and those who were chosen by the judges would be the ones to perform on stage.

The talent acts ranged from folkloric Bolivian dancing to singing to gymnastics to even demonstrating soccer skills.

The last scholarship opportunity was given during a workshop students attended called “Initiviates for Action,” which focused on cybersecurity and how to find solutions to different situations by working with their familia.

The group that best demonstrated an effective, realistic solution with excellent presentation skills would be the winner.

In respect to the purpose of HCI of achieving higher education, students attended a college fair that took place on the second day of the program.

Colleges, like the University of Virginia, Virginia Commonwealth University, Radford University, and Hollins University, were present and had representatives to answer students’ questions.

Moreover, students were also exposed to Latinx professionals who shared their experiences of how they were able to achieve success and the position they are currently. Additionally, these professionals reached out to the students to be their mentor on their journey to college.

However, some of the students were also able to find a mentor within their own familias, or even other familias.

Gina Vandivier, a student at Virginia Tech double majoring in political science and human development and minoring in sociology and Spanish, who will be graduating in May of 2021, was one of 25 leads chosen, specifically for familia #24.

Her qualifications for this position include being the Vice President of Latin Link, an undergraduate honor code hearing panel member, a Hokie Ambassador tour guide, and an InclusiveVT intern under the office for inclusion and diversity.

Commenting on her experience as a familia lead, Vandivier said, “My experience at HCI as a leader was empowering and unique. Leading a group of amazing girls and spending time with other members of the Latinx community gave me a sense of belonging that I had never quite experienced before. Listening to others’ stories of strength and overcoming adversity made me grateful that programs such as HCI exist to unite our community and encourage individual growth for high schoolers during a time in which or world is so divided.”

However, the junior leads of HCI were equally as impactful on the attendees.

Chela Vasquez-Perez, a student at Virginia Commonwealth University majoring in psychology, minoring in Spanish, and studying a translating and interpreting program, who will be graduating in December of 2020, was one of 25 junior leads selected. As a minority student, Vasquez-Perez joined the Latina sorority called Sigma Lambda Upsilon/Señoritas Latinas Unidas Sorority Incorporated this year, which enabled her to form bonds with other empowered women that share similar cultures, struggles, and goals.

Despite being a first-year volunteer, Vasquez-Perez understands how meaningful HCI is not only to the group of girls she that she was assigned, but also herself in the position of empowering others.

“I can truly say it has changed my life, I cannot wait to go back next year,” Vasquez-Perez said. “I think sometimes as we get older we forget to acknowledge the fact about how far we’ve come; sometimes I forget to praise myself. Having younger Latinx students look up to you and look to you for guidance is very reassuring and also very self-fulfilling. Meeting my familia, I saw myself in each of them when I was 16/17 years old, looking for someone who could possibly mentor me and it’s crazy to think that only a few years later I would be that mentor for someone else.”

At the conclusion of HCI, Vandivier reflected upon her experience as a leader.  “Although HCI proved to be an intensive program with minimal time for sleep, I left feeling stronger and happy that I was able to have an impact on the students who will one day become the leaders of our community and world.”

The AHS student attendees were also able to reflect on their experience as Latinx uprising seniors preparing to apply to colleges in the Fall.

“I gained so much information that I wouldn’t have gotten if I hadn’t gone,” Sanchez Quiero said. “After HCI I feel like I have changed in the way that I now sort of know what my plans are going to be after high school. I also feel more confident talking about my background with others and opening up about the challenges that Hispanics face.”

“I got to meet so many wonderful people and I even found my mentor for my college process,” Alarcón said. “HCI made me more open-minded and grateful. It taught me that somehow there’s always going to be an opportunity for me to prosper, but it’s up to me to take action.”

As seen through these participants and leaders of HCI, the program manages to uphold its goals for Latinx students.

“I say if you have the opportunity please don’t miss out on it! You truly gain a lot of knowledge, cultural enrichment and just a sense of confidence, pride and welcoming you can’t find anywhere else,” Vasquez-Perez said.