Students allowed to miss school for demonstrations with parent permission 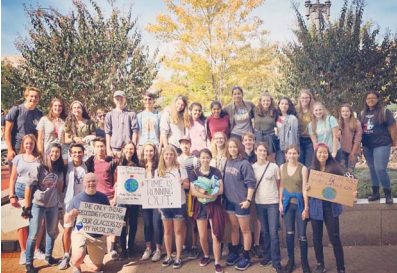 Nowadays, students are more active than ever when it comes to politics.

From voting rates, to writing pieces, to bringing their opinions to social media, there has never been a time where teenagers were more active in government.

A lot of the times, this means participating in protests to incite a need for change in public officials.

For example, a large amount of students at AHS protested against President Donald Trump’s election three years ago.

Even more participated students participated in the March for Our Lives Protest against gun violence, which was prompted by the Parkland, FL school shooting just one month prior.

Both protests, in addition to many others, take place during school hours. This means that they require students to miss part of school, or maybe even an entire school day.

In many school districts, this would count as an unexcused absence, meaning that the student would deal with backlash from teachers and school administrators regarding missed assignments.

However, according to FCPS spokesperson Lucy Caldwell, missing school for a protest now counts as an excused absence if parents notify the school of the absence ahead of time.

This means that the student does not have to worry about being in trouble with their teachers, much like if they were to miss school for illness or a field trip.

In past times, school staff could not prevent students from attending protests that were on school campuses, but the rules regarding protests out of school were not clear.

Many students are happy that there are now clear rules that let them attend protests without worrying about the consequences at school.

“In my opinion, it is nice that students are now being given a chance to go and participate in political issues if they wish,” senior Megan Le said. “It’s a nice idea, as long as no one abuses it.”

Most school administrators appear to be on the middle of the spectrum.

“I think that the ability to protest is important, but I think that education is just as important,” administrator Monica Bentley said. “Of course, the right to assemble is important. I think that it is all based on how important the student finds the belief to be. I realize that some things are not always black and white, and sometimes things happen in the moment.”

One problem with this policy is the risk of having students leave or not even come to campus without their parents’ permission.

With the previous protests that students participated in, administrators were able to monitor the students because they were on campus.

“Safety is very important when it comes to these things,” Bentley said. “That’s why we would absolutely stress and
require parent permission if a student wanted to participate in a protest.”

Many local school districts have a similar policy, including Washington, D.C. and Arlington County.

However, Alexandria City would consider the absence unexcused.