AHS security team cracks down on students vaping in the bathroom 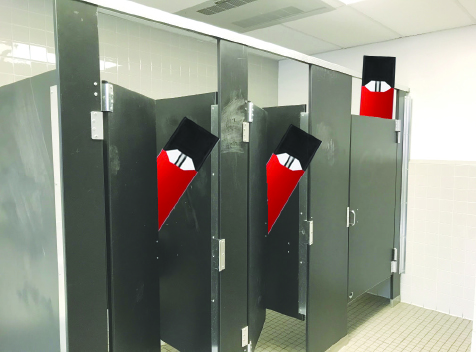 Juuls or other vaping devices are a common scene in the bathrooms at AHS. The problem got so bad, the boys bathroom in the business hallway had to be shut down for a whole day.

The end is nowhere close to near, vaping nicotine or THC products continues to be a widespread issue across the nation. In our niche of Annandale, the problem is highlighted through the continuous use of vape products by students.
It is a common sight to see multiple students vaping in the bathrooms in between classes, during lunch and even during class time.
“It gets hard to tell whether the girls bathrooms smells like perfume or a JUUL pod nowadays,” senior Sydney Wuhrer said.
Just last week, the bathroom in the business/math hallway was shut down due to excessive incidents of vaping.
The issue is so bad, students have started to take a comical approach to the intensifying situation.
One student has labeled the time in between periods in the very bathroom that was shut down “IB Vape SL”
“I just don’t understand why kids can’t wait until after school,” senior Michael Brown said. “All I want to do is use the bathroom but I can’t have any privacy if I have JUUL smoke clouding my vision.”
Teachers and administrators have taken notice of the vaping problem and the security team has developed a counterattack against vaping in the bathrooms.
The AHS security team has dubbed it “Operation Clean Vape.” The operation will be carried out over the next several weeks to come and the team will be targeting different bathroom locations throughout each week.
Safety and Security Specialist Philip Taylor sent out a message to all staff members outlining the goals of the operation. “The security team will be proactive,” Taylor said. “However, we need your [the teachers] help.”
The operation states that teachers should limit giving their students bathroom passes. Teachers are especially encouraged to limit bathroom passes to students who have a consistent record for leaving class to use the bathroom.
Due to the high number of passes that have been handed out in the past, passes often float around the school; allowing multiple students to have a “pass” for the restroom.
This ‘Operation Clean Vape’ will only be successful if we get buy in from you,” Taylor stressed in his message to the teachers.
Although many students find the excessive vaping in bathrooms a nuisance, some students argue that the operation is an impediment on their privacy and that it won’t be that effective.
“I don’t think the operation will work as effectively as planned,” senior Mohammed Khatib said. “Using fear tactics and invading other people’s privacy is just going to make students trust the administration less and be more secretive about their activities.”
Despite student opinion, the problem of vaping in school bathrooms is likely to be affected by this new strategy.