The A-Blast places second in the nation at fall convention 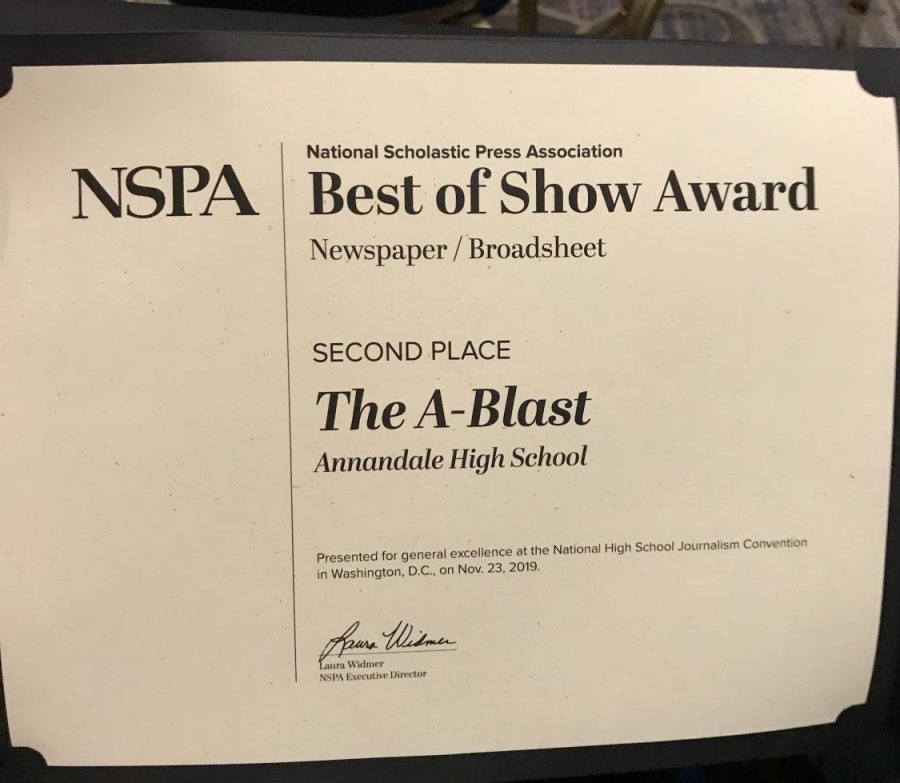 Bustling crowds of high schoolers work their way through the halls of the Marriott Wardman hotel in D.C. They are all there for one reason, the JEA/NSPA fall national high school journalism convention.

12 people from The A-Blast staff attended the convention from Thursday Nov. 21 to Saturday Nov. 23. There were many activities including guest speakers, classes, and competitions.

Over 6,000 students and over 500 schools attended the convention nationwide. Many newspapers submitted one edition to the JEA/NSPA judges. The newspapers were then ranked and the scores were announced on Saturday night.

“I really enjoyed the convention overall, everyone had an opportunity to meet new people and learn a lot about journalism from professionals,” Co-Editor in Chief Manny Precht said.

The A-Blast was ranked second in the nation in Best of Show in the broadsheet category.

The third edition of The A-Blast was submitted. The head story for that edition written by Suad Mohammed titled “What happens now?” was a huge part in the success of The A-Blast, as the story incorporated student life along with an overarching issue in political awareness and activism. Additionally, The A-Blast is fortunate enough to have pages such as an In-Depth, Arts and International that most schools don’t have otherwise.

“We decided to go with our latest edition from November because of the strong content on all of the pages,”  Precht said. “All stories were unique and relevant to our school.”

The A-Blast also won the prestigious Pacemaker award which is granted to excellent student run newspapers. Although it is supervised by Journalism teacher Alan Weintraut, The A-Blast is run by the student journalists, who choose and create the content, so they are the ones to congratulate for the award.