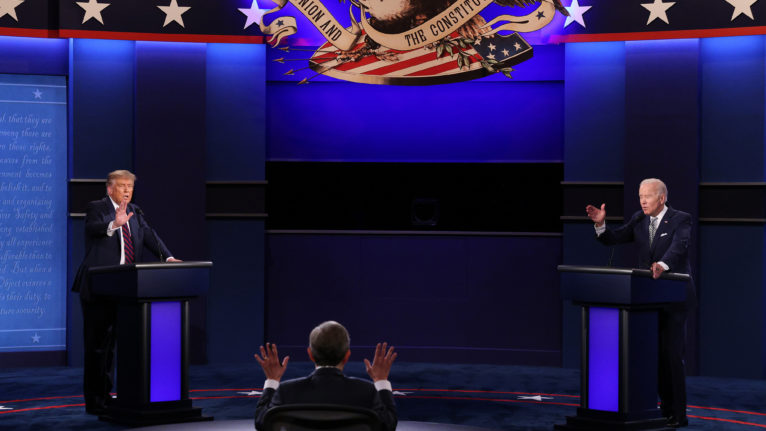 Moderator Chris Wallace holding his hands up in protest of the candidates talking over one another, a common theme throughout the night.

Presidential nominees President Donald J. Trump and former Vice President Joe Biden took to the debate stage in Cleveland, Ohio on 9/29. With political drama ranging from COVID-19 response, race relations, and a controversial supreme court nomination, it’s safe to say that this was one of the most anticipated debates in recent American history.

Despite all of the anticipation, it is quite fair to say that the debate did not live up to the hype. Both candidates spent the majority of the debate bickering, name calling, and speaking over one another instead of having a real debate.

President Trump engaged in clashing arguments with FOX news correspondent Christopher Wallace, the moderator of the debate. Both candidates talked over each other on numerous occasions and failed to directly answer important questions on their beliefs and policies.

“I was disappointed that the debate for the highest office in our land involved name calling and other childish attacks, I prefer candidates who show moral integrity and a firm understanding of important issues,” government teacher Matthew O’Neill said.

With mail ballots and early voting already taking place in numerous states, this was a prime opportunity for both candidates to speak directly to the American people and get their message and policies across. Instead, the candidates rather engaged in direct personal attacks.

One of the mainly criticized moments of the night for President Trump is when he refused to directly denounce white supremacy.

Former Vice President Biden mocked and labeled President Trump throughout the debate with names like “racist”, “clown”, along with “the worst President America has ever had”.

“I feel like based on how both of the presidential candidates presented themselves, Biden won the debate. He was more direct with how he answered things. For the next debate they should consider adding a second moderator to have less communication issues,” sophomore Hannah Vaughn said.

Former V.P. Biden turned away from his opponent to speak directly to the camera, asking American citizens how many families had an “empty chair at the kitchen table” due to Covid. He also encouraged everyone at home to go out and register to vote.

This was a common reaction from many Americans, as neither of the candidates backed up many of their claims or accusations with valid facts, or spent much time at all talking about their policies on healthcare or climate change.

With one of the highest anticipated political events of the year, no matter your political beliefs, this first debate was a true letdown and missed opportunity for both the candidates and the American people.