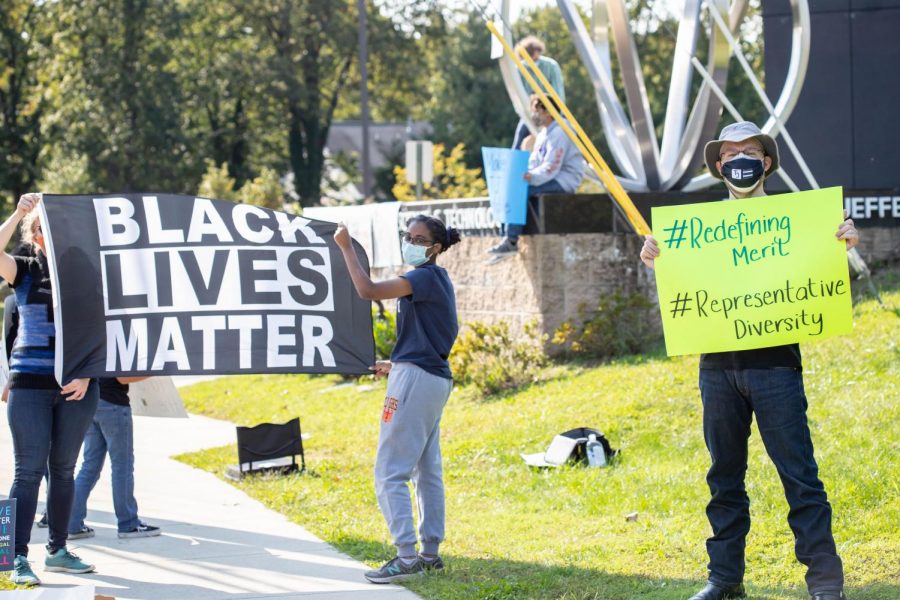 Thomas Jefferson High School for Science and Technology senior Dinan Elsyad (middle) attended an event at the school on Oct. 4 called the Redefining Merit-thon that aimed to address the 30 years of disparate treatment of Black and Latinx students, students with disabilities, and students with low socioeconomic status.

Four years ago, when senior Haleluya Worku took the Thomas Jefferson High School for Science and Technology admissions test, she woke up early on a Saturday morning, finished the test, thought the math section was especially hard and then promptly forgot about ever taking the test.
“I did not care about that test at all and only took it because my parents made me,” Worku said. “I knew that even if I did get in, I would be one of the few Black kids there.”
Now, though, the admissions process is going to look a lot different for this year’s eighth graders. The admissions test has officially been eliminated along with the $100 application fee.
At the end of the day, the test was never a great indicator of success or interest,” TJ senior Dinan Elsyad said, “so I don’t think removing the test will lower TJ’s standards.”
What will take its place to determine who gains admission to TJ remains the question on everyone’s minds and a controversial one at that.
TJ’s student body is presently around 70 percent Asian, 10 percent White, less than 3 percent Hispanic, and less than 2 percent Black.
FCPS Superintendent Scott Brabrand proposed a merit-based lottery system with the aim of boosting Black and Hispanic enrollment. The school board did not end up making a decision about the proposed lottery system and Brabrand promised a revised plan by November.
“I have absolutely no faith in our school board or the TJ community to back that decision, so I do not personally believe a lottery will take place,” Elysad said. She also believes that doing away with the test alone won’t solve TJ’s problems of racial inequity.
“TJ’s specific issue is the severely racist culture that has been fostered over the years,” Elsyad said. “It’s going to take a radical change to change TJ for the better.”
Interestingly enough, senior Thinh Vo, who took the admissions test but did not make the cut, doesn’t think the admissions process should change.
“TJ wouldn’t be as prestigious as it is now,” Vo said. “If students are mostly Asian, then there’s really nothing they can do.”
Many argue that that’s not a fair argument to make, though, considering some students face a lack of access to test prep materials that puts them at a clear disadvantage.
“People from all over the county pay taxes into TJ, so TJ’s demographics should reflect people who live everywhere in the county,” TJ senior Quentin Lovejoy said.
With such a contentious issue, it’s hard to get people to listen. “I’ve had parents attack me, questioning why I’ve felt the need to advocate, since no one asked for my opinion in the first place,” Elsyad said.
What the admissions process will consist of is still unclear. Worku’s younger sister, an eighth grader, isn’t willing to take this chance and would much rather attend Annandale with her longtime friends.
The effect that this admissions change will have on Annandale’s future student body also remains to be seen. One thing’s for sure: as the decision for a new admissions plan looms, tensions will continue to heighten between two fiercely opposing sides.