The decision came a day before 6,800 students were supposed to return 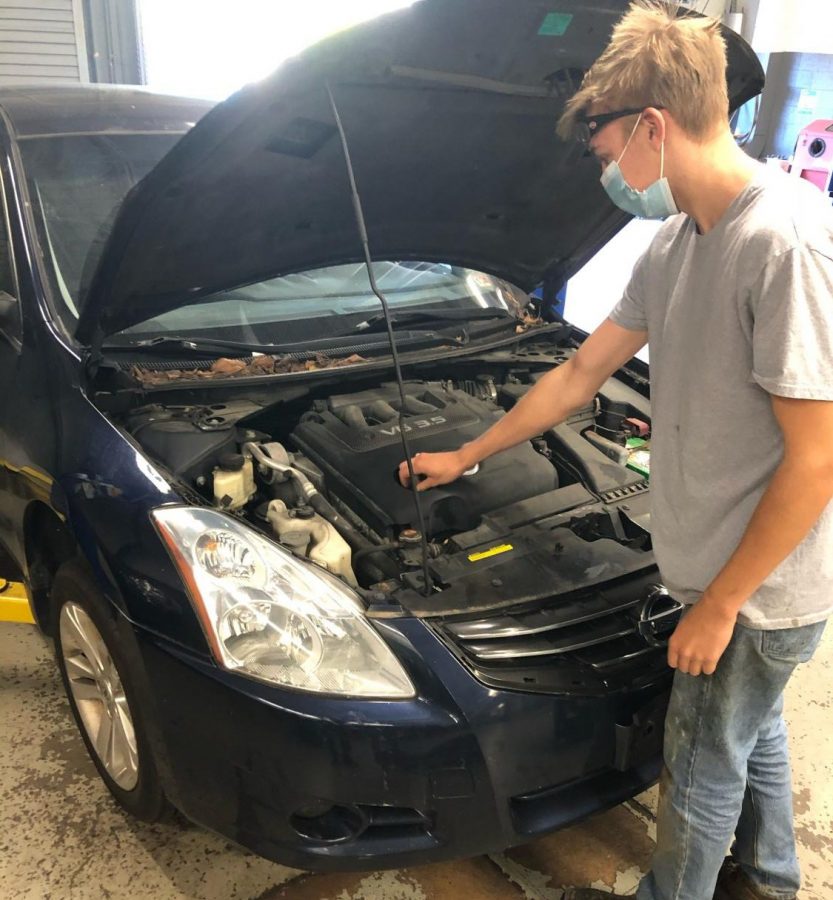 Senior Nicholas Pemberton works on a car in his Auto Tech class. “I definitely missed being in the shop,” Pemberton said. “It’s better than doing the online lessons.” He will continue attending in-person classes on Mondays even though the next group of students is no longer returning to school because of an uptick in COVID-19 cases.

Fairfax County Public Schools has delayed additional students returning to school in response to the recent spike in Covid-19 cases.
Even after the Fairfax County School Board work session on Nov. 12, administrators had still planned to bring back more students to in-person learning despite the increasing trend in COVID-19 cases in Northern Virginia. Critics were confused by FCPS Superintendent Scott Brabrand and the school board’s decisions.
“I have seen too many contradictions and illogical policies recently to honestly say that [the Superintendent and school board] are handling it well,” English teacher Ingrid St. Clair said. “Several board members have my full respect and support, while others seem to be hyper-focused on an outcome, denying facts and logic that make that outcome unsafe.”
Only in the afternoon of Nov. 16, the day before 6,800 Early HeadStart, Pre-K and Kindergarten students were set to return to in-person learning, did the Superintendent release a message that expanding in-person instruction would be put on pause due to the worsening COVID-19 health metrics.
These students will not be returning to in-person learning until at least Nov. 30. President of Fairfax County Federation of Teachers disapproved of this potential return date, considering that there will be many small group gatherings in the preceding days for Thanksgiving.
Meanwhile, students who have already transitioned into some in-person learning, such as young children, special education students and career and technical students, will remain in school as normal. This makes up roughly 8,000 students.
“I think delaying these new groups is a step in the right direction, but I really wish FCPS would have simply waited until it was safe before bringing anyone back,” St. Clair said. “Five high schools reported cases over the past two weeks, and due to the long incubation period of Covid, those cases are probably only a fraction of the cases we will see over time.”
Senior Han Le, who takes Musical Theatre as an academy class, could have returned to school but chose against it.
“I did not want to be the cause of spreading this virus,” Le said. “Especially with the increase in cases and the winter season approaching, I wanted to keep my family safe even if I won’t be able to get the full experience of an academy class.”
Students at other schools are also sharing the same sentiment.
“As much as I want to go back right now because I’m missing my senior year, I know that it’s safer for me to not go back,” Robinson Secondary School senior Vivian Klosk said.
AHS, specifically, is already seeing the risks of COVID-19 firsthand. On Nov. 15, in cooperation with the Fairfax County Health Department, Principal Shawn DeRose emailed all staff members that a staff member at school tested positive for COVID-19. This staff member and any others who may have been exposed to the virus were transitioned to virtual learning.
Many teacher associations in the county are even resorting to appealing to Virginia Governor Ralph Northam to keep all schools in Virginia closed, feeling that their concerns are not being listened to by the county.
“I have written to [the Superintendent] several times to explain the flaws in his reasoning, but he seems determined to go forward with his plan, despite a large percentage of teachers lacking confidence in it and even leaving the profession to remain safe,” St. Clair said.
The reasons for which the Superintendent believed the county was well-equipped to return to school also remain unclear.
“Our Fairfax County Covid numbers are higher than they were in July when he announced that it was not safe to return, yet he advocates for a rapid return to the buildings, saying that we know more about mitigation strategies than we did in July,” St. Clair said. “Mitigation does not mean protection. It means a reduction in the number of people infected. That is not enough for me.”
High school students are still scheduled to return on Jan. 26 with the choice of opting out. But, if the last few months have been any indication, Le is not interested in taking part.
“With how we are handling COVID-19 so far as a nation, I don’t see myself going to school full time in February,” she said.
There will be a virtual Return to School Town Hall from 6 to 7 p.m. on Thurs. Nov. 19 that will provide the most updated information.