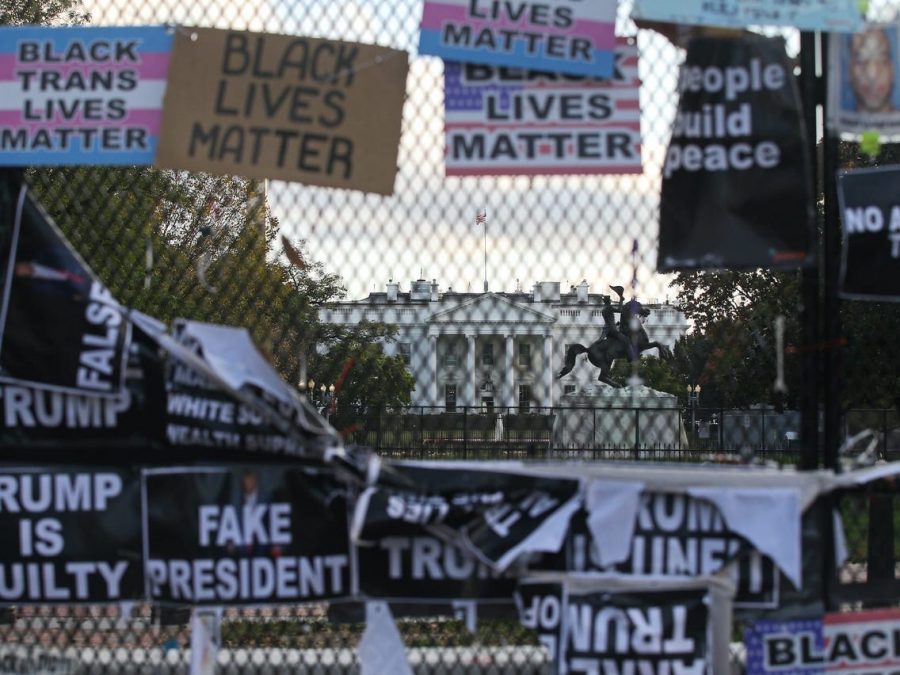 The fence outside the White House is covered with posters and signs on Nov. 15 after celebrations over Biden’s victory and protests over Trump’s recent actions.

The election has passed and a winner was declared. Joe Biden will be the 46th President of the United States. However, a smooth transition of power might be out of reach.

President Trump acknowledged that Biden won but still will not concede. He blames his loss on voter fraud and has been questioning the validity of the election since before the votes were counted.

The president also tried to create court cases to invalidate the results of the election. Many of the cases were based on the idea that absentee voting led to mass voter fraud. State officials have denied all claims made by the Trump administration.

The Trump campaign lost six cases in Pennsylvania. A case in Arizona is currently pending.
“I think Trump and his administration should accept the outcome of the elections and stop spreading false information. They just need to go,” junior Brian Mercado said.

Trump has been taking to Twitter to share his thoughts on the matter. “He won because the Election was Rigged,” and “I concede NOTHING! We have a long way to go,” were just two of the many tweets. Twitter has flagged most of his tweets for disinformation.

“I feel like it is completely unacceptable and immature for the President of the United States,” junior Noah Hush said. “Trying to cling to a nonexistent chance of victory and spreading outright lies and conspiracies to his uneducated followers is despicable.”

In the days following the election result, Trump supporters protested near the White House. There were fights between Biden and Trump supporters. The D.C. police arrested 21 people. One protestor was stabbed and four officers were injured.

Trump has also decided to remove anyone who does not follow his beliefs or who he views as disloyal. He recently fired a handful of top officials at the Pentagon.

“It is embarrassing that he is such a sore loser. Imagine what the rest of the world is thinking,” junior Eleanor Lauderdale said.

Normally, a president would congratulate and concede to a president elect. However, Trump has done neither. Without a smooth transition, the pandemic could escalate and create more problems for the Biden administration.

“I can’t say I blame him because there is still a lot of speculation about the election,” junior Zack Pacak said. “However, I find it really sad that there has been so much violence over the outcome of the election.”

After the results were released, many foreign leaders congratulated President-Elect Biden on his victory. Some of these leaders include Canadian Prime Minister Justin Trudeau, British Prime Minister Boris Johnson, French President Emmanuel Macron, and German Chancellor Angela Merkel. Most of the world views Biden as the next president.

“I am not surprised at all,” senior Zainab Islam said. “Everything about his unfortunate presidency has been unprecedented.”