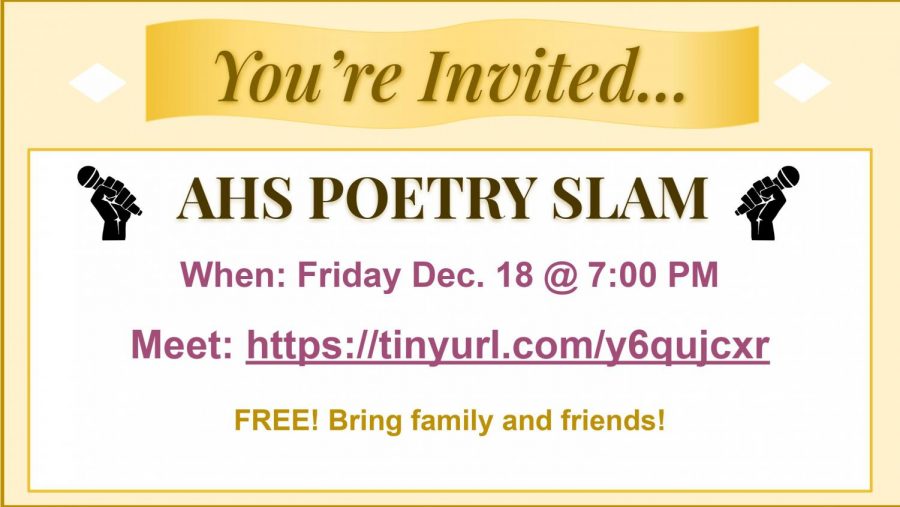 AHS will be hosting its first school wide poetry slam and its first virtual one at that. This event will be available for all students to watch on Dec. 18 at 7 p.m.

There will be poems performed by six poets that made it through the audition process: Rahaf Bahr, Jasmine Carlos, Nhi Nguyen, Hunter Duggan, Abigail Kollath and Ernest Owen. In the audition process, these poets all sent in two poems in two formats, video recording and documents.

“I submitted two poems, one was called Dreams and one was called Heartless,” senior Hunter Duggan said. “Dreams were about finally realizing what you want to do in life but feeling completely incapable of achieving it, thinking it will never happen. Heartless is about the intriguing way of loving someone, describing the feeling of unrequited love, how it’s not a choice or gift but a state of being.”

“Lots of simile and metaphor and subtly telling a story,” Duggan said, when asked to describe their style of writing poems.

The first place winner of the slam will receive a $50 gift certificate from El Paso. The second prize is still undecided. Prizes will be mailed and sent out to the winners.

When poets perform in the poetry slam, they will go through three rounds and will be judged by five strong poets who graduated from Annandale.

“The judging will go as judging for the Olympics,” Lee said. The lowest score is a 0.5 and highest is a 10.0. The scores will be added till the third round between the last two poets.

The judges will be prepared by Lee and when judging will take a few things to consideration.

“The quality of writing, performing skills and the after feelings the poem has on the audience, will all be judged,” Lee said.

AHS is planning another poetry slam for the end of the year if this one is a success.

“This poetry slam could inspire other students to try out for the next poetry slam,” Lee said.