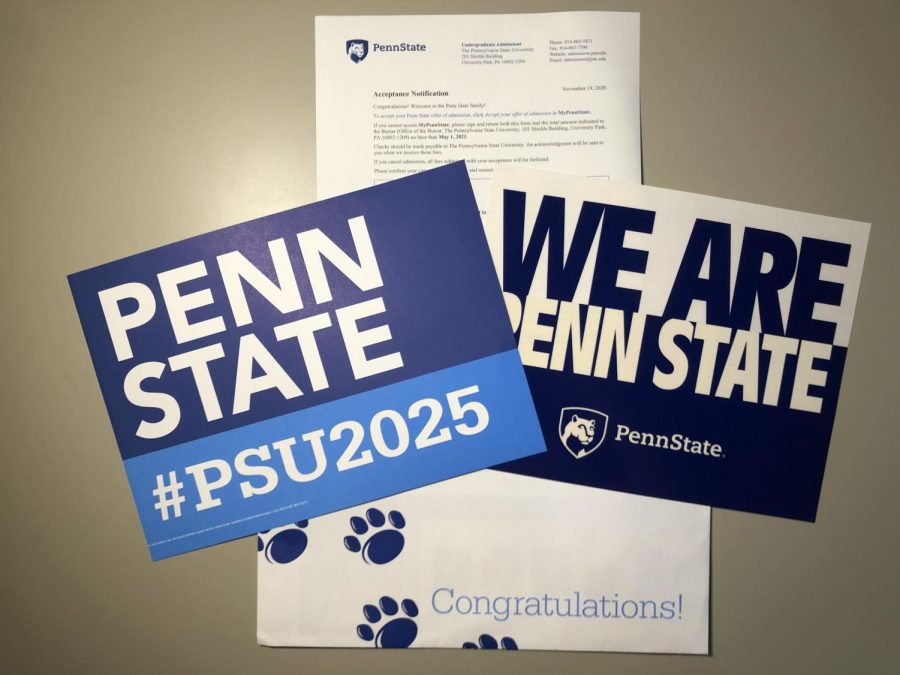 Some Penn State applicants received decisions as soon as Nov. 23. The school seems to be admitting by major.

Although it’s been only a few months since the school year started and the majority of seniors are still applying to college, some seniors already know where they’ll be spending the next four years.
Senior Eva Gomez applied Early Decision I to the College of William and Mary and was accepted.
“I realized I just wanted to get into college early and not have to be so worried about it later in the year,” Gomez said.
She found out last week that she was accepted. Since it was binding, she had to withdraw all her other applications.
“It was so exciting,” Gomez said. “I called my friends while I was there, and it was nice to know that I’m set for next year.”
Senior Madison Cruz also knows where she’ll be for the next four years, but in her case, she was recruited to play soccer for Ferrum College.
The recruit process started in ninth grade for her when she started attending ID clinics and camps over the summer and on the weekends where she would show her skills to scouts and college coaches. By the end of her sophomore year, she was speaking to coaches over the phone and through email.
“After an hour on the phone with the coach, I knew [Ferrum] would be the right fit for me. While on campus, I spent time with the admissions officer as well as the sports recruiter,” Cruz said. “It felt like home sitting outside the admissions office in a rocking chair staring out at the beautiful trees.”
Gomez shares this sentiment in finally knowing where she belongs.
“I’m so happy and ready for next year. I’m in a bunch of group chats with other William and Mary people and they are so funny and welcoming,” Gomez said. “I am just so glad that the hard part has been finished.”
There are also some seniors who haven’t decided where they’re going yet but have received some college decisions already.
Virginia Commonwealth University has a rolling admissions policy and has already accepted some students. Marymount University has already accepted students through Early Action. Early Action results came out for George Mason University last week.
In the coming months, the University of Virginia is notifying Early Action applicants in February. James Madison University will be releasing Early Action decisions in January.
In the meantime, Cruz’s advice to seniors is to consider all your options and enjoy this while it lasts.
“Be open minded to all the opportunities that are presented to you,” Cruz said. “Soak up every moment of the process because it will only happen once in your lifetime.”