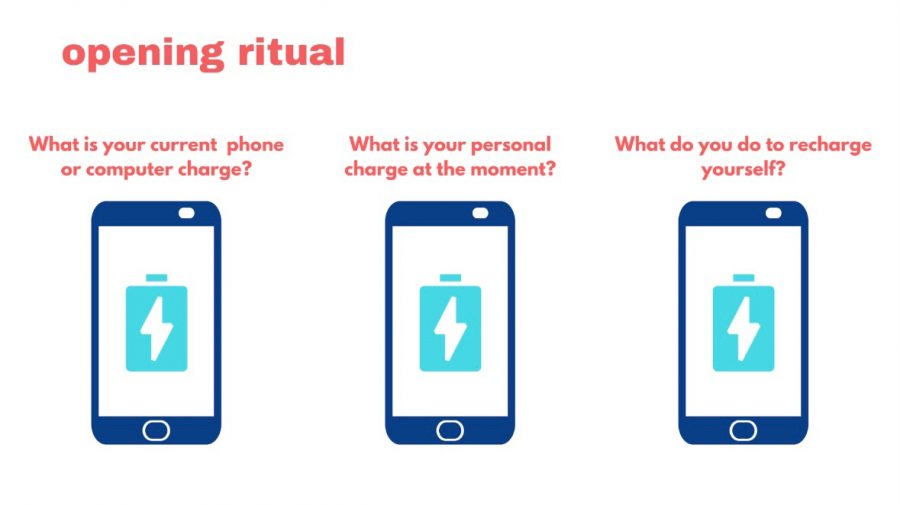 During the Atom Minds Matter interest meeting, attendees participated in an exercise where they discussed the charge on the device they were using but also the personal charge that each individual felt. Everyone was also invited to share what they do to recharge. In addition, there was a meditation exercise for people to try out together.

Senior Salma Yousafzai was taken aback when she realized AHS did not have a mental health club. She knew something had to be done.
“It’s important to have mental health clubs at schools, so we reduce the stigma around mental health among teenagers,” Yousafzai said. “I want people to learn that mental well-being is as important as physical health and that it’s okay to not be okay.”
Her mission for better mental health all began in her sophomore year. In her junior year, she got started on the process of creating the club with the help of senior Jimmy Le. Due to the pandemic, however, the start of the club was postponed.
Now, in her senior year, the club has finally been launched with her at the forefront as club president. There has also been a tremendous amount of staff support.
“Our student services team had previously talked about starting a chapter of Our Minds Matter at AHS, but we never had a student interested enough to get it off the ground,” school psychologist Laurie Ottehenning said.
When Le approached his counselor Stacie Shaffer about being a sponsor, that’s when everything began to fall into place. Shaffer asked Ottehenning if she would also be a sponsor and she accepted.
In addition to Ottehenning and Shaffer, math teacher Nicole Ferree is the third co-sponsor of Atom Minds Matter.
For now, all three sponsors are very active in helping get things organized but they hope to take a step back eventually and let the students take over.
“This is really supposed to be a student-led club, so once we get going, we will be mostly relying on the student leadership team to keep things organized and planned while the co-sponsors are in more of a support role,” Ottehenning said.
The interest meeting turned out to be a resounding success with many students attending over Google Meet and excited about what comes next.
“My hopes are that in starting a community like this, we can work towards eliminating the stigma around mental illness and create a safe and comfortable environment for everyone in the future,” club member and senior Kelly Tieu said.
As for what comes next, there are a lot of plans in the making.
“Our leadership team has some great ideas about school-wide campaigns and activities, like a wellness week that we hope to do before the end of the year,” Ottehenning said.
In the meantime, the next meeting will be taking place on Mon. Feb. 1.
“We’ll be talking about Mental Health 101 where students will learn about the similarities of mental health and physical health, so they can understand why mental health is important,” Yousafzai said.