Freshman orientation tour a success, next one scheduled for tomorrow 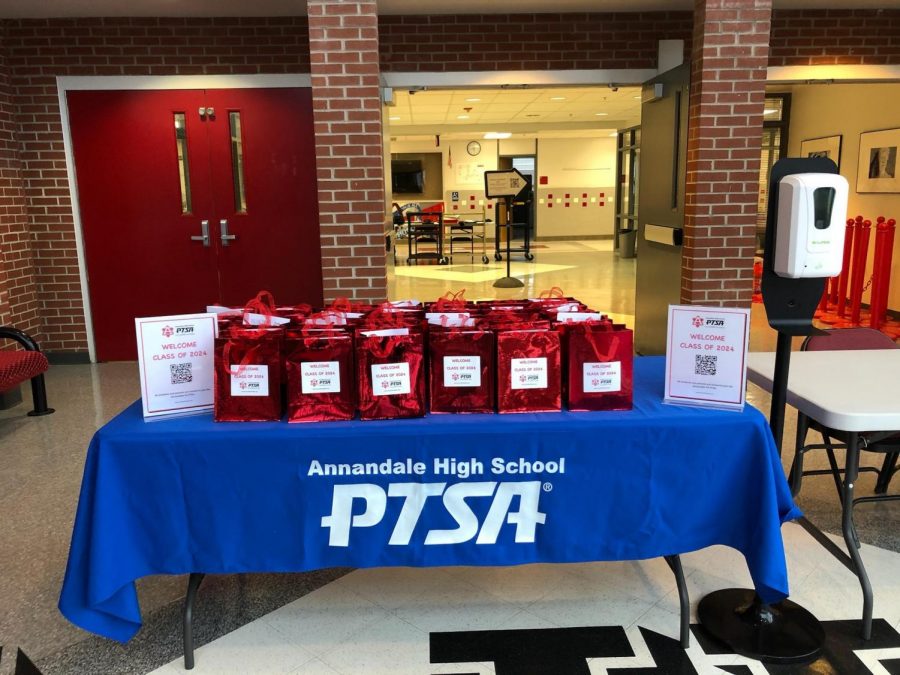 The PTSA distributed gift bags to visiting students during the orientation.

On Mon., Feb. 22, AHS hosted an orientation and tour for freshmen and new students participating in in-person learning.

It was an opportunity for them to get the lay of the land in preparation for the following week when they would be returning to in-person learning. Students that chose to attend had to sign up in groups of eight, and each group was assigned a thirty-minute time slot. Masks and a distance of six feet were required.

The tour started in the main lobby, where there was a sign-in table and surprises for the freshmen, courtesy of the PTSA. It was similar to the “Back To School” event usually scheduled in the last week of summer, right before school starts. Only, in this case, school has been going on for more than six months.

“We are so excited to have students back in the building to meet them in-person and welcome them to Annandale,” Assistant Principal Megan Sherrill said. “It’s not much fun working at a school without the students. The students bring excitement and energy to the school and to our jobs.”

Students were led around the school to important rooms like the office, attendance room, clinic, cafeteria, Clausen Hall, library and gyms. Students could see the modifications the rooms had to go through to be suitable for learning during a pandemic.

“The most helpful part was when they gave me information about what is going to happen for the start of school,” freshman Matthew Munoz said. “It was pretty exciting since they were enthusiastic and they made me feel welcomed.”

There will be another orientation on Mon., March 1 due to popular demand. At first, only one orientation had been planned and groups had been limited to four people. However, to allow more students to attend, the number changed to eight and the additional orientation was scheduled.

Students that want to sign up for the March 1 orientation can do so on the SignUpGenius sent in the Annandale Community Insider email.

With the return to school looming closer, the orientation was an opportunity to help freshmen and new students feel more comfortable and familiar with the school, because at this point in a normal year, they would already be.

“I want the freshmen and new students to know that it’s normal to feel anxious when confronting a new place and so many changes,” Sherrill said. “We are all feeling this anxiety, but we are sincerely really excited to welcome all our students back into the school building and begin a return to normalcy.”