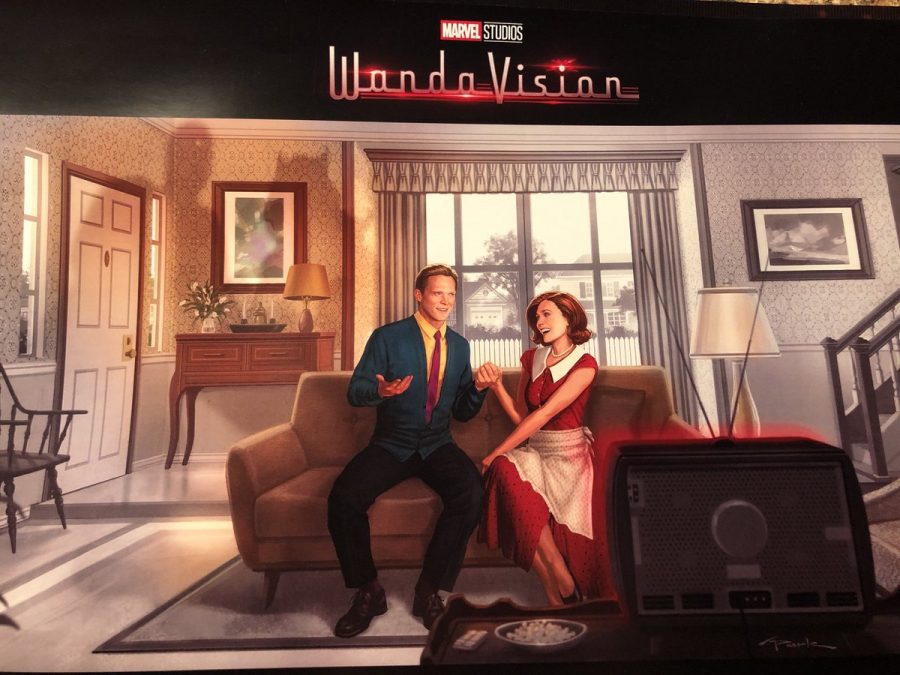 The Marvel Cinematic Universe’s most recent installment, WandaVision, has done an amazing job at leaving its viewers equally engaged and confused. If you haven’t started watching it yet, I suggest you go in totally blind.
WandaVision is a wickedly fun, surprisingly dark and insanely creepy departure from the standard Marvel formula.
Major spoilers for WandaVision ahead.

Since I last wrote about Wandavision, five new episodes have been released. Episode three sees the show finally in color and embodying the style of 70’s sitcoms like The Brady Bunch and All In The Family, complete with a standard “mother gives birth and father is flustered” plot.

However, this episode feels less like a comedy than the first two and starts to put things into place.

Episode 3 makes the unsettling elements feel like they have been implemented for a reason beyond being creepy. Episode three soaks in its surrealism, unease and slight humor.

Episode four chooses to focus almost entirely on S.W.O.R.D instead of Wanda and Vision. It feels like all of the most boring parts of a Marvel movie. This episode reveals that Wanda has created this sitcom-style reality for herself and imprisoning missing persons to populate her sitcom town.

This episode confirms that this story takes place after Avengers: Endgame, which is especially weird, considering Vision died in Infinity War. We even see an image of Vision seemingly dead. Episode four is devoid of most of the WandaVision charm but is still a capable MCU entry with some really interesting ideas.

Episode five, however, is my favorite episode so far as it expertly showcases its horrific elements set in the ’80s this time, with a classic “new dog” sitcom plot.

Meanwhile, at S.W.O.R.D., the agents are still trying to figure out what is going on with Westview. This episode serves intensely creepy visuals, as well as blisteringly intense scenes, like the confrontation between Wanda and Vision.

This episode all but spells out that Wanda has created this sitcom reality out of grief over the death of Vision so that she and Vision can live a happy family life.

This episode also sees the return of Quicksilver. However, this time he is not played by the MCU actor Aaron Taylor Johnson but instead X-Men’s Evan Peters.

Episode six is set in the ’90s and shows a wide array of influences.

Whether it’s Quicksilver and the kids making a very obvious Malcolm in the Middle homage, or Vision’s half X-Files, half Twin Peaks venture to the end of town, this episode is the most diverse tone-wise yet. Not much happens in terms of the plot, following a classic Halloween sitcom plot.

This episode displays creepy visuals, more B-plots, as well as rising tensions in S.W.O.R.D.’s ranks.
Something with cellular decaying happens that’s not fully explained, but I’m sure we’ll figure out later on.

This episode, while lighter than most, is a stellar entry into this series, and is the best at balancing its many tones and elements.

Episode seven seems to be just a filler episode in the style of Modern Family or The Office, with Wanda adopting a Claire Dunphy impression for the majority of the episode

However, everything changed in the last couple of minutes, as it is revealed that Agnes, Wanda and Vision’s friendly neighbor, is Agatha Harkness, a character that is very close to the Wanda Maximoff story.
It is revealed that all the dark things in Westview are because of her.

In another reference to the comics, it seems as though breaking through into Westview has activated the powers of Monica Rambea. However, we don’t get a showdown between her and Wanda just yet.

This episode feels mostly like it is setting up for a satisfying conclusion, and I can’t wait to see where WandaVision continues from here.