Students and teachers return to the building for in-person learning 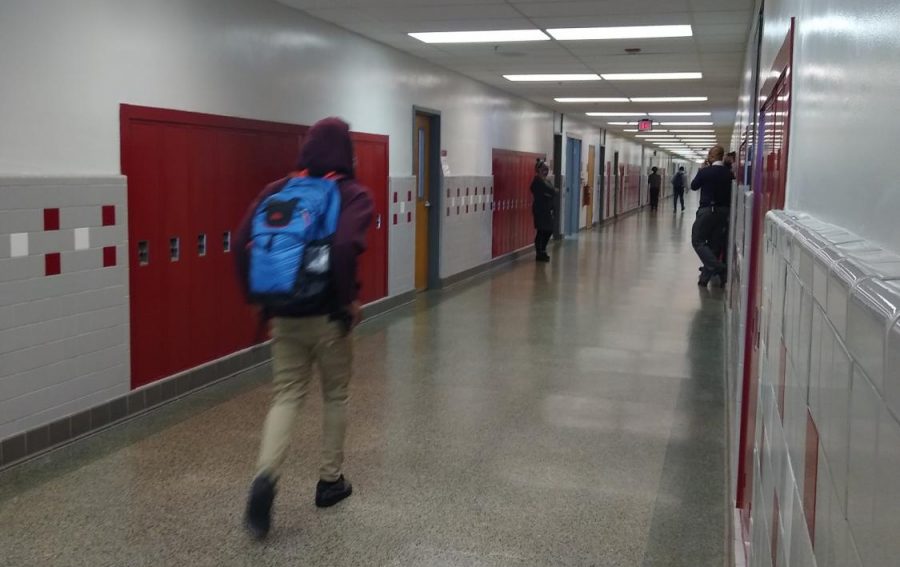 Mostly empty hallways during passing periods is much different than the usual crowded hallways with students pushing past each other.

The school was empty and quiet. In the hallways, there was barely any noise except for the rustle of students walking. During class, it was the teacher that talked. Students, sometimes just a singular student in the classroom, didn’t speak as much as usual.

There was no gentle murmur of people talking, no jarring noise of chairs being moved around, no jokes being shouted across the room. Sometimes, a lone voice would be heard in the hallway, a pinprick against the background noise of class: the monotone drone of a lawnmower, the rumble of the room’s heater or just deafening silence.

There would be no more getting close to people, no more hugging people, no shaking hands. School is much different than what it was like when it closed last March, to say the least.

“Something difficult was socializing with people you’ve never met. Coming from Frost [Middle School], I don’t know too many people so it’s harder to make new friends and meet new people because of the safety precautions,” freshman Crystina Ing said.

This first week of March, AHS opened its doors to freshmen and seniors as the first grades returning to in-person learning. Sophomores and juniors will return the second week of March.

Students that chose to return would participate in concurrent learning, a hybrid of virtual and face-to-face instruction. Last names A-K receive in-person instruction on Tuesday and Wednesday while last names L-Z would on Thursday and Friday.

“I am still getting used to talking to people in the room and in the Google Meet and to making sure I am presenting the screen to both groups of students and that I am meeting both groups’ needs,” Math teacher Susan Moore said.

The return to school has also brought about a new schedule. Most periods now have slightly different start times resulting from the time in between classes changing from ten to eight minutes. Lunch was drastically changed from an hour to thirty minutes. Furthermore, students in-person now need to wake up earlier in order to get prepared for and travel to school.

For some, the change wasn’t bad.

“I love being back in the building,” Moore said. “I had to get used to a new routine, but it is nice to be out of the house and at school.”

For others, the change was rough.

“It was hard waking up earlier and the school days feel longer,” freshman Marc Akl said.

Nevertheless, students are back at school! It’s visible evidence of a return to normal. For many teachers, the joy and excitement of finally seeing students helped dull the difficulties. After months of sitting at home teaching black squares, talking, seeing and being with students at school, even six feet apart with face masks on, soothed the problems.

“Today, I had so much fun helping them with math,” Moore said “I even got to write on the board! So, so fun.”

Some students are also glad for this shift to in-person learning, even if it’s only two days a week, because it’s a break from the usual.

“Online was becoming a little too much of the same ritual and routine of laziness and staying in bed and doing my work, and this is a nice change,” Ing said. “It was a little bit intimidating but once I kind of understood the gist of where everything was, it was cool because everyone was so nice and helpful.”

For others, adjustment is going to take a bit longer.

The return to school has been a learning process for many and has resulted in many hurdles. However, for staff and students alike, simply being back at school and seeing each other outweighed them. At the very least, it was something different that many desperately needed.

Regardless of how you feel about it, the return to in-person learning confirms three things: the dedication and perseverance of the staff, the willingness of students to learn and the tentative start to a return to normal.

“It was different. I guess different was really good and something new, which I appreciated,” Ing said.