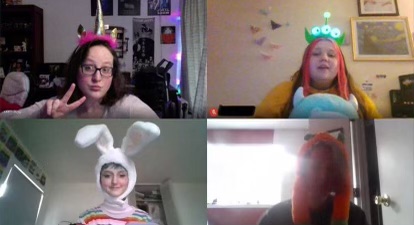 On Thurs., March 25, the Annandale Theatre Company will present the fourth and last episode of their series, The Death of Theatre: 100 Years of Sad Plays Crammed Into Less Than 100 Sad Minutes, by Dannie Snyder.
The play was produced through the work of four actors, a director and a playwright. The show stars sophomore Atlas Martindale as Actor 1, junior Amanda Weaver as Actor 2, senior Isaac Nebyu as Actor 3 and senior Hunter Duggan as Actor 4.
Despite the limitations placed on the cast by coronavirus, they were able to act and produce this show through a little creativity and determination.
Still, senior Isaac Nebyu felt like he was able to explore the full range of his acting skills.
“I would say 40 percent of my script is improvised,” Nebyu said. “In the beginning, I wasn’t allowed to ad-lib, but when they saw that it improved the script they let me continue, as long as it made it better.”
Acting virtually, live in a Zoom meeting, was certainly a struggle but one that paid off. The cast rehearsed each episode around six times, and they had two months of rehearsals from around December to February.
The actors also learned a lot dealing with Zoom. In the end, they knew how to pay attention to the audience and their script at the same time, change angles, deal with microphone issues, hosting, links and many other elements to produce a successful show.
“I think virtual theatre is a great way to include more of a diverse audience, since it allows for flexible viewing times,” Theatre Arts teacher Katie Brunberg said.
Virtual theatre proved to still be rewarding and interactive.
“I feel like the comment section was really important because usually we would have an actual audience to perform to,” Duggan said. “I feel like this is why Ms. Brunberg chose this play, because of audience participation through the comment section.”
Overall, the actors learned from the experience and got to perform theatre in a new light.
“Everyone was great, all the actors, Ms. Brunburg and Dannie Snyder,” Nebyu said. “We all worked really hard and hope more people can watch and give us their feedback. It was a fun time and everything went pleasantly well.”
Episodes one to three are now on YouTube. If you tune in live, you can chat, comment and support the actors during their last live show.
There is more to come from the ATC in the future, but the goal stays the same.
“I hope the future of ATC is one of inclusion and diversity,” Brunberg said. “I hope to create space for all types of actors, technicians and audience members to feel represented and celebrated.”
Through it all, there’s always the hope to get back to normal as soon as possible.
“I hope ATC is able to return to doing live theatre, because there is a special kind of magic that comes from it that just doesn’t happen virtually no matter how hard you try,” Brunberg said.