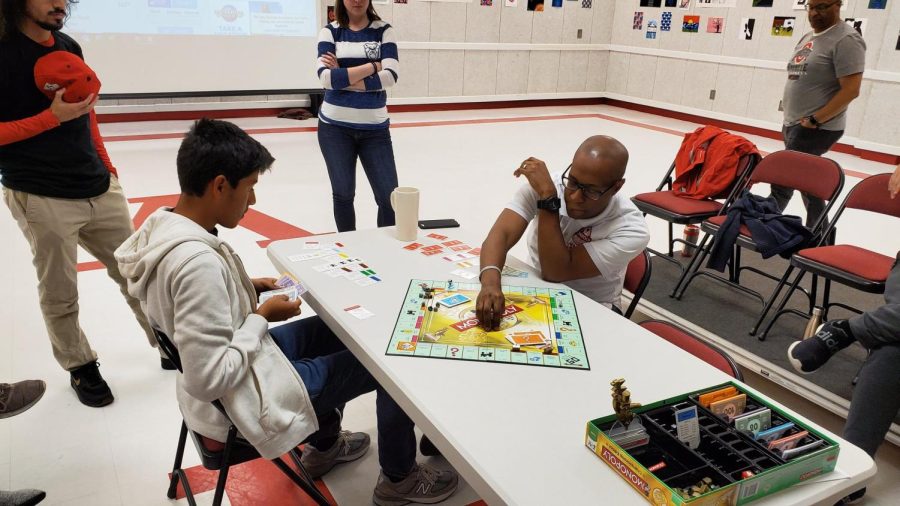 Brian Mercado and Brian Valentine face each other in the the finals of the 2019 Monopoly tournament.

Monopoly has been one of the most popular and recognizable board games since its release in 1935. Monopoly is a staple in houses across the country and in the AHS community.

The AHS PTSA is hosting its third annual Monopoly tournament on Sat. Nov. 13 in Clausen Hall. The tournament will take place from 9 a.m. to 5 p.m. and consists of 4 rounds.

“I’m excited to play in the Monopoly tournament. I usually play Monopoly with my cousins, so playing against different people with all sorts of experience and tricks will make each game fun and interesting,” senior Brian Mercado said. “I feel pretty good about my own ability and I think I have a good chance of winning this year.”

Mercado placed second at the second annual Monopoly tournament in 2019.

The tournament will be scheduled as follows: round one and two will take place in the morning and each will consist of one time limited game. The winners from the morning will compete in the round three semifinals. There will then be four players that will go to the finals.

The grand prize will be $200 and a Monopoly game. Tickets are $10 for students and $15 for adults and can be purchased on the AHS PTSA website. Lunch is included in the ticket price and will be two slices of pizza and a soda or water.

“I had always played as a kid with my family, that was our game. Whenever we had game nights Monopoly would be the game we played,” Valentine said. “I had started winning pretty often and I wanted to see how I would play against other people I don’t know.”

In 2011, Valentine took a plane to California to play in a tournament. He took fourth place and started to compete in many different areas.

All of the proceeds from the tournament will be going to help fund the PTSA and the AHS community.