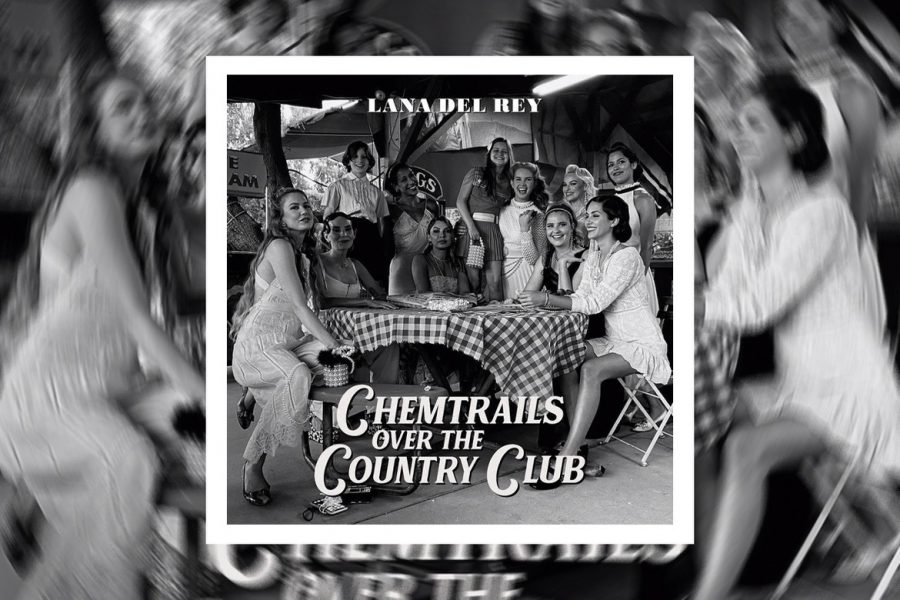 California based pop star Lana Del Rey’s newest album, Chemtrails Over The Country Club, released this past Friday. This release comes amidst tons of controversy for the artist, with 2020 being and especially tumultuous year for Lana.

Although I am very much a Lana denier, with albums like Ultraviolence and Honeymoon being insanely boring, derivative, and ugly at point, the quality of her two newest releases really surprised me.

Lust For Life is an at times middling project, but really nails the mix of vocal pop, hip-hop, and 1950’s aesthetics that Lana was going for in her early work, with tracks like “Get Free” and “Heroin” being perfect examples. It’s a fun, novel album with some really good hooks and guest verses. Lanas following record, 2019’s Norman F***ing Rockwell, was and even bigger surprise. Huge, lavishly arranged pop stunners, her catchiest and most creative tracks the to date, and a cover of Sublime made NFRa must listen.

That being said, Chemtrails over the Country Club is easily her worst album to date.

The opening “White Dress” might be a contender for the worst song I’ve ever heard. Terrible, shottily put together midi pianos, boring, overly generic lyrics, and the absolute worst vocal performance I’ve ever heard Lana give make this 5 and a half minute song borderline on impossible to get through. Lanas upper register is absolutely awful on this song, and the sped up sections on the hook are blood boiling. This song should have been laughed at and scrapped.

Luckily, the next song, and title track for the album, is not as overtly garbage. Super generic, soaring vocals and a vapid piano instrumental make this song feel saccharine, but In comparison to the last track, it’s stunning. The lyrics on this track are meandering and fake deep, even if they are more descriptive. The end of this song is somewhat satisfying, but this still felt like a huge waste of time.

The time wasting continues onto the next couple of cuts, with Tulsa Jesus Freak and Let Me Love you like a woman being some of the most generic and underwritten songs that Lana has ever put on a record. The former, Tulsa Jesus freak, has a somewhat sweet, nostalgic melody from Lana. Although the vocal lines and harmonies are somewhat pleasant, the extremely generic, piano based production and heavy reverb make this song feel like a terrible Weeknd cut. This song doesn’t overstay it’s welcome and is somewhat pleasant, but absolutely nothing to write home about. Let me love you like a woman is and equally generic, yet straightforward guitar ballad. Lana somewhat sticks to her strengths on this one, but it is still extremely underwhelming, with generic vocal lines and the most basic lyrics that I’ve heard on a Lana album.

Wild at Heart follows the same formula as Let me Love You, but has quite possibly the best chorus on the entire album. The sauntering, catchy hook adds a much needed sense of fun to COCC. Despite this, it still makes me wanna hit the snooze button.

The following two tracks, Not All Those Who Wander are Lost, and Yosemite are some of the most boring songs I’ve ever heard. Total snoozefests, with Lanas signature, grating, boring croons over a shottily constructed instrumental, complete with and annoying guitar lead. The same can also be said for the track Dance Until We Die, however, around 2:30, Lana breaks into my favorite passage on the whole album, where Lana sassily sings over a Motown blues instrumental. This brief moment shows off so much vocal prowess and incredible talent, that it almost made me forget how boring the rest of the song is.

The tracks Breaking Up Slowly and For Free offer the only guest spots on the record, going to popstars Nikki, Weyes Blood, and Zella Day. All of these features totally stun, leaving Lana in the dust on her own songs. This is especially the case for Weyes Blood, who absolutely dominated the track she’s on with a gorgeous melody, explosive performance, and super tight vocal layering. The rest of the features do a good job at proving that Lana is the weakest part of her own song. However, these tracks do leave COCC on somewhat of a high point, it is still not even close the enough to make up for the rest of this record.

Chemtrails Over the Country Club is a boring, disappointing, and very difficult listen. With standouts being few and far between, I see absolutely no problem with saying this is my least favorite Lana album to date.