Involved senior looks to find stability with school and sports 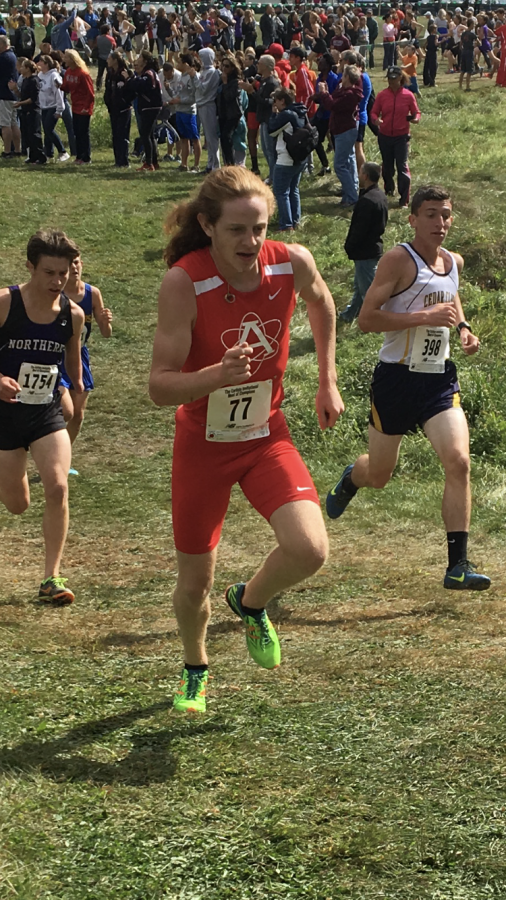 With multiple IB classes, clubs, leadership, cross country and ice hockey, Tyler Westfall does it all.

On his hockey team, Westfall played a major role in helping the team be victorious as they won the 2016-17 PVAHA Championship.

Westfall has consistently been a top runner on the cross country team throughout all his years in his school and qualified for the conference meet this past season.

Along with school assignments, tests and projects, student athletes have to manage to find a balance between school work and sports practices and games.

Westfall has been working to find a balance between the two throughout his time at AHS.

Not only does Westfall partake in multiple school sports, he also has to manage with making time for ice hockey, which he plays outside of school.

“It can be difficult to balance everything, because after school would end I would go to cross country practice until five and then go to hockey practice right after,” Westfall said. “There are some nights throughout the school year where I do not get home until around 10 p.m.”

Playing a sport in school and another sport outside of school during the same season could be problematic for student athletes. There can be conflicts with practices or games between the two sports.

“Ice hockey is one of the most important things to me,” Westfall said. “I do everything I can to never miss a practice or a game.”

With participating in multiple sports throughout the year and having school work to complete,
Westfall is also a part of multiple extracurricular activities such as clubs and is in leadership.

“In addition to hockey and cross country, I am a part of a couple clubs such as FCA,” Westfall said. “I am also in the leadership class, so that is another priority but it is a lot of fun.”

When it comes to athletes being a part of sports outside of school, it is most often due to that sport not being offered in school.

“Playing ice hockey is a huge priority for me because it’s my favorite sport,” Westfall said. “I find it unfortunate that the school does not offer it and does not have an ice hockey team.”

There are a number of sports that are not offered in schools. When this is the case students elect to join a team outside of school.

“I favor playing sports outside of school because I think where the best competition is,” Westfall said. “I think that is the case for at least ice hockey.”

A large part of being able to balance school and sports deals with work from classes. More rigorous classes typically lead to a larger work load.

Similar to Westfall, student athletes find themselves in these situations when arriving home from practice late and having a large workload.

“I find it important to put school first before any other activities,” Westfall said. “It’s hard to find balance with everything going but it is possible.”

In these situations, it is most essential to be organized and delegate time for everything. One may have many obligations to fulfill but must remember that school work comes before.