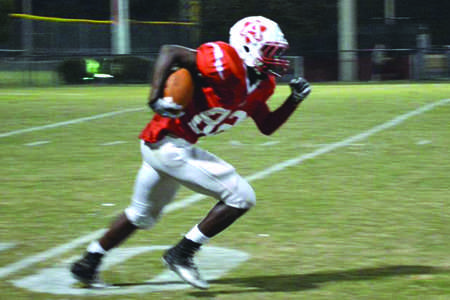 After losing to Oakton 15-34 on September 20, the Atoms strive to improve as a team.

The Atoms second home loss of the season leaves room for improvement. They need to make adjustments to become better as the season progresses.

“I think our guys played really hard. We have to eliminate stupid penalties and some stupid mistakes,” head coach Michael Scott said.

The team has been working since the beginning of August. However, they still find themselves on the wrong side of the scoreboard.

“We guys who are working really hard, giving it everything they got and the school should be very proud of them,” Scott said.

The game ended with a score of 15-34, with sophomore Tim Johnson scoring both touchdowns. But everybody on the team was disappointed they didn’t come out with a victory.

“I performed pretty well, it wasn’t enough to get the win, but it was enough to keep us in the game for the most part,” Johnson said.

The Atoms looked like they would come back, down 15-20, but Oakton retaliated with two touchdowns and sealed the deal.

“We played well as a team, at the end of the game we kind of slowed down,” senior Steven Schwartz said.

The team is looking to continue working hard, everyday after school and some weekends to try to get better.

“We’re making progress, this is going to be a very good football team when it’s all said and done,” Scott said.

As the team looks forward to their next game away at Lake Braddock on Sept. 27, they will watch film of this past game and work to improve on they did wrong to prepare for next week.

The team will try hard to win and even their season record as they go into their next game 1-2.

“Those guys are working really hard, it’s grind, and we’ve got a tough stretch ahead,” Scott said.