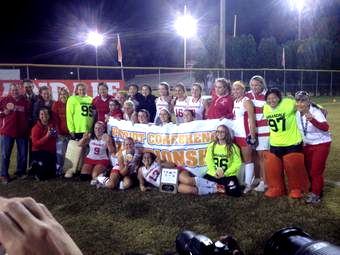 This sealed them the Patriot Conference 7 championship.

The goals were made by senior Rachael Allshouse,  senior Jenny McCann and junior Janan Gokturk. McCann’s goal, the second one, was made off of a penalty stroke.

The Atoms have greatly improved since last season, advancing a full three rounds farther than last year, where they only made first round of districts. Last year, they were at 10 wins and 7 losses. This year so far, the Atoms are at 12 wins, 5 losses, and 1 tie.

“This season we set certain goals that we really wanted to meet, and we didn’t let anything stand in the way of achieving them,” senior Kara Hoisington said. “I never thought we’d become district champions, but its amazing that we did.”

Despite the win, the Atoms were in a dilemma early in the game, being down by one after the first half.

“After South County scored the first goal, it made us want to go back and make up for that goal, and we did by scoring three more goals,” senior Lee Hayes said.

“I think it went amazing because we came out strong in the first half and kept up the momentum throughout the whole game,” McCann said. “I think we gave up too many corners, and we just need to work on protecting our feet more and improving our footwork.”

The last time AHS Field Hockey won the Patriot Conference championship was in 2004, and the most recent district championship for AHS in any sport was in the 2011-2012 school year for track, so this is a huge accomplishment for the field hockey team and the AHS community.

The Atoms will host Osbourn High School tomorrow Oct. 29 in the first round of the 6A Northern Region tournament at 7 p.m., admission will be $7.