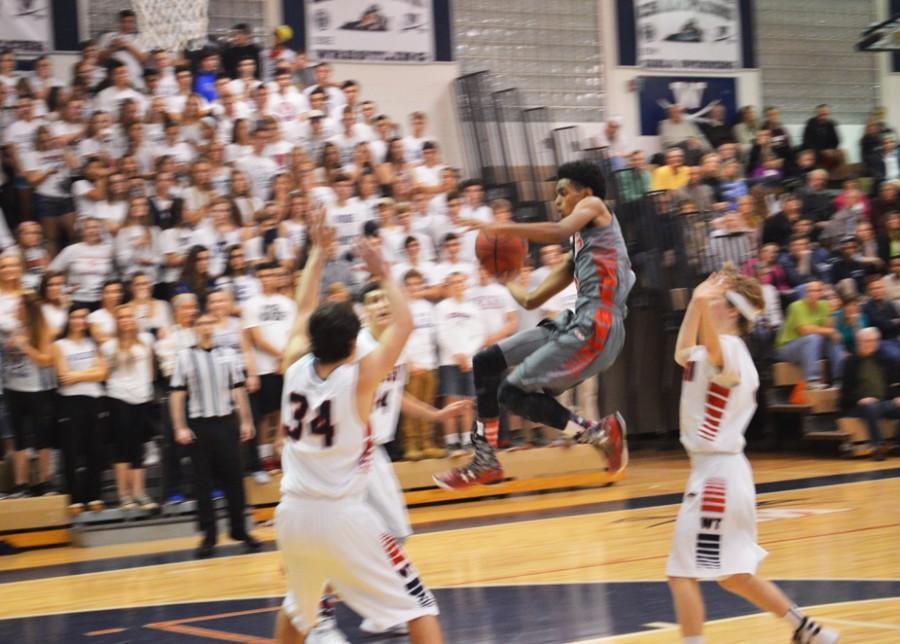 Sophomore Matthew Mckiver goes up for the shot to draw the foul.

The Boys’ Varsity Basketball team played their fourth conference game against their top rival, W.T. Woodson, on Friday, Jan. 8. The last time these two teams faced each other, the Atoms lost 46-68 so the team was seeking revenge with huge crowds on each side. The first half was low-scoring and extremely tight, the score at halftime being 29-29. Sadly, however, the Atoms fell short of victory and lost to the Cavaliers 59-69 at the end of regulation.

The senior captain, however, was an offensive weapon for the Atoms. Mohamud had 13 points, seven offensive rebounds and six assists.

“Individually, I feel like I could have grabbed a few more offensive rebounds,” Mohamud said.

“I had five steals, that was really good, but I couldn’t make a jump shot until the fourth quarter,” Adams said.

The main areas that the team was struggling with offensively were rebounding and turnovers. Collectively, the Atoms had 14 rebounds and 21 turnovers, only two of which [turnovers] came from Johnson and Mohamud.

“The biggest factor to the loss was turnovers. We had 21, which is way too much if you want to win,” Johnson said. “As a team, I believe if we took better care of the ball, then we would’ve had a much higher chance to win the game so we really have to work on that.”

Defensively, the team had another rough night due to foul trouble. The Atoms had more than double as many team fouls as their opponent.

“The main reasons we lost was due to foul trouble and turnovers,” Adams said.

As the matchup was between two rival schools, it was no shock that the thunderous crowd was cheering throughout the whole game.

“The crowd was very loud, but as a player, you don’t really focus on that. When you’re in the game, nothing else really goes through your head except what’s on the court so I don’t think that had an effect on us at all,” Johnson said.

Some players, however, are fueled by the booming crowds.

“The crowd noise did not affect me personally. I actually enjoy playing in loud places like Woodson. It would be great if home games could be that loud,” Mohamud said.

With the heated rivalry came a sense of familiarity, especially when it came to reading the opposing team’s offense.

“I feel there was enough preparation,” Johnson said. “We knew what they were going to do but we just have to do a better job of executing.”

Days of practice leading up to the game were focused on knowing the Cavalier’s offensive structure and implementing ways to disrupt it.

“Coach Behne went over the Woodson offense so we were prepared for what was ahead,” Mohamud said.

Following this game, the team’s overall record dropped to four wins and eight losses, including tournaments, and a conference record of one win and three losses. Conference games are crucial, as the season just passed the halfway mark, for home court advantage as well as playing a lesser ranked team in the first round of districts. Each team gets to play every team in their conference twice, the second time being towards the end of the regular season.

“Next time we play Woodson, we will be sure to run their players off the three point line and play solid help defense,” Mohamud said.

Coach Matthew Behne maintains an optimistic attitude on this crucial conference game, and for the remainder of the season.

“We always learn from our games, little things help us win, there are a multitude of events that happen in game that you can learn from. It gives us fuel to continue to prove our doubts wrong and prepares us for the second round of conference games,” Behne said.

The team’s next game will be another conference match at Lake Braddock on Tuesday, Jan. 12 at 7pm.