The Atoms football team fell to a record of 2-3 on the season after losing to longtime rival W.T Woodson. 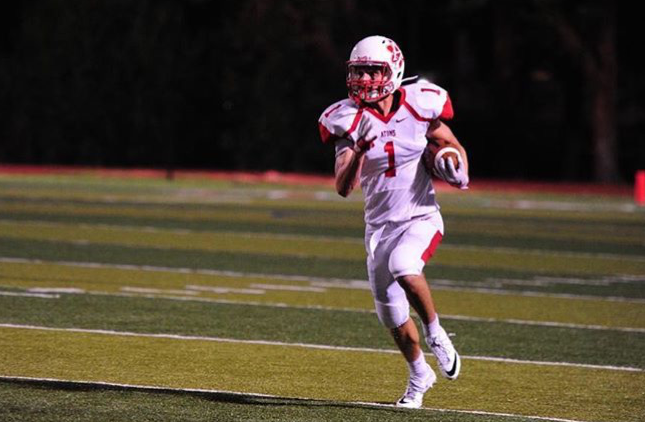 The Atoms were looking to get a win streak going following a satisfying 44-0 shutout win against the Jeb Stuart Raiders last Friday night.

But with a quick three and out on the Atoms’ opening possession only 2 minutes into the game,  things looked dim from the start.

Things would improve for the Atoms seven minutes later, after forcing and recovering a Cavaliers fumble. However, the Atoms were not able to turn this turnover into points following a deep pass down field from senior quarterback Liam Conroy to Sophomore Franco Kitila that would be dropped forcing the Atoms to punt the ball away.

The Cavaliers then marched down the field and scored the first touchdown of the game from eleven yards out, with five minutes remaining in the first quarter.

Things would become more frustrating for the Atoms on their next possession following a Woodson sack of quarterback Liam Conroy and an incomplete pass to senior Jalen Jackson which would lead to another Annandale punt.

The Cavaliers moved the ball down the field towards the end zone and scored on a one yard rushing touchdown, to increase their lead to 13-0.The Cavaliers successfully converted on a two point conversion to go up 15-0.

Woodson managed to hold the Atoms from any points in the first quarter. “We were caught off guard by the defense they were playing”, sophomore Franco Kitila said.

Annandale and Woodson traded punts until the Cavaliers scored again with a rushing rushing touchdown 10 minutes into the third quarter.

Jalen Jackson would run the football and brake away from tacklers on Annandale’s next possession to get into the end zone and score the Atoms first points in the game. The Atoms successfully completed the two point conversion to make the score 22-8.

Woodson regained control of the ball and were able to move the ball down the field, but the Atoms defense stepped up and forced the Cavaliers to settle for a field goal. With only 7 minutes remaining in the game the Cavaliers went up 25-8

Woodson would force a turnover with an Atoms interception. But the Atoms answered right back the following play with an interception of their own.

A few plays later the Cavaliers defense regained possession once again with another interception which was returned to the Annandale five yard line.

The Cavaliers offense ran it in once again and scored another touchdown to extend their lead to 32-8 with only a few minutes left in the game.

The Atoms could not convert on fourth down which handed the ball back to the Cavaliers, who knelt multiple times to wrap up the game with a final score of 32-8.

The game was frusterating for the Atoms’ offense as they were not able to get into a rhythm.

“The defense did their job, but the offense just couldn’t connect to put points on the board”, Kitila said.

The Atoms will have two weeks to bounce back from the loss, as their next game is the homecoming game against the Mt. Vernon Majors on October 7th.